Space mountain (Ric Flair) wasn’t there and the American Dream(Dusty Rhodes) has passed away but wrestling fans got a great show Saturday night.
As a fund raiser for the Sheriff’s Office  Scholastic fund Mid Atlantic Championship Wrestling a division of the NWA had fans on their feet. From the first match to final bell it was non-stop, high flying , DDT, belly to back suplex , elbow smashing action. Smack talking was the a big part of the wrestling show as it should be and yes  I was in hog heaven. Right along with all the kids there. Some of the wrestlers would shake hands and high five the kids others ( bad guys) wouldn’t be nice. One of them Rik Nelson of the famed Midnight Express days even started a little smack talk with Sheriff Hancock but he soon found himself and thought better of that idea.
However, fan favorite “Buff the Stuff” Bagwell  who came out and took up time for a photo op section earlier came back later as the main attraction.
The “buff man” took on some devil, demon, face painted, big mean looking dude and dispatched him with some hard slams and boots to the head action that brought the crowd to their feet. It was a great night and I look forward to more wrestling action in Cordele. Thanks Sheriff for bringing back wrestling it was great!!!!!!!! 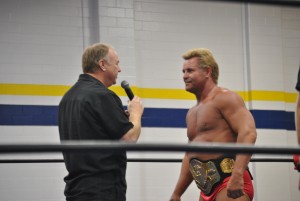