Cougars and Bobcats mix it up in Vienna

The Crisp County Cougars visited Dooly County Saturday and came away with a 68-50 victory.

However, in the first half it was the Bobacats who were all smiles. Dooly jumped out to 16 to 13 lead over Crisp in the first period.  Then went into halftime up by 4 points 31 to 27.

The bigger cats from Crisp would roar back in the 3rd stanza out pacing Dooly 23 to 13 to take the lead 50 to 44 and they didn’t let up in the final quarter out scoring Dooly 18-6 to take the win by 18.

Quinatvious Dean led the Cougars in scoring with 17 points followed by Ijon Owens with 16 and Quay Walker added 8 points. On the Bobacats final tallies it was Adrian Kenney who led all scoring with 18 points and he got some needed help from Jar’Quavius Brown and Tyjae Taylor who both pitched in 9 points apiece in a losing effort. Team statistics favored the Cougars who out rebound the Bobcats 31 to 26 and had slightly more assists 14 to 10 than did Dooly. The Cougars shot 55% from the field compared to Dooly’s 43%. The biggest discrepancy was the from the line shooting were Crisp only shot 59% and Dooly had an awful 20%. Both teams managed 8 steals apiece. Next up for Dooly is a home game against region opponent  Brookstone in Vienna on Friday night at 6:00p.m. the Cougars travel to Thomas County Central to take on the Yellow Jackets on Friday as well in a crucial region game at 6:00p.m. 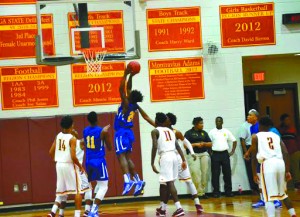 Friday night saw Bainbridge put one on the Crisp County Cougars. The Cougars fell behind from the start and were never really in it losing 67-47

Falling behind 36-20 at halftime the Cougars shooting was dismal at 32% from the field as a team and 62% from the line. Add to that only 18 rebounds and it is clear to see where they went south in the game. Ijon Owens led the Cougars with 16 points followed by Quinatvious Dean with 9 and Valdis Daniel with 8 chip ins.