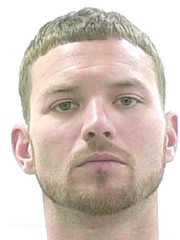 PERRY — A sentencing hearing has been tentatively set for an Abbeville man after pleading guilty to the armed robbery and kidnapping of an elderly Bonaire woman in 2015.
Houston County Superior Court Judge Edward D. Lukemire set the hearing for 34-year old Larry Dean Marchant for some time in March. Marchant plead guilty to charges of kidnapping, armed robbery, burglary and theft by taking. At approximately 2 p.m. on March 19, 2015 Patsy Joiner, a 74-year old resident of Wisteria Drive in Bonaire, Georgia, was taking out the trash behind her home when she was taken by surprise by a man described as wearing camouflage shirt and pants, and blue gloves with a ski mask worn over his face.
The masked man, who was later identified as Marchant, brandished a black pistol at Joiner. It was later discovered that the gun was fake, though Joiner did not know at the time of the kidnapping.
Joiner’s ordeal lasted approximately two hours. First, Marchant forced Joiner into her home and demanded she contact her credit union to get money transferred from her savings account into her checking out for withdrawal.  Fortunately the bank representative, who heard someone speaking to Joiner in the background, sensed that something was not right and advised Joiner she would need to come in to a credit union office in order to make a transfer.
It was then that Marchant ordered Joiner into her 2007 Lexus RX350. While hiding under a blanket in the back seat he forced her to drive to two credit union offices where attempts were made to withdraw the funds in the drive thru window. Both attempts were unsuccessful and the credit union had placed an alert on Joiner’s account. Joiner was informed both times that she would have to come into the office to make the transfer.
With no success at the banks, Marchant ordered Joiner to drive back to her home. Joiner, suspecting that her kidnapper would take to a secluded area and kill her, courageously seized an opportunity to save herself by jumping from the SUV at a Georgia Hwy 247 intersection not far from her residence. As she ran to the motorist behind her own vehicle, Marchant sped away.
Marchant’s co-defendant, Joshua Moore, is charged with kidnapping, burglary and armed robbery, but plead not guilty to those charges during his arraignment. Moore’s part in the crime consisted of dropping Marchant off at Joiner’s residence and then picking him up after he abandoned her vehicle. Investigators were able to tie the white Ford F-150 Moore was driving to the kidnapping after a routine traffic stop. At the time of the traffic stop, Moore was arrested for drug possession and law enforcement impounded the vehicle. Further investigation linked Moore to the crime. The men got away with a handmade blanket, her cell phone and purse.