Seeking 5th State championship in the last 6 years. The Crisp Academy Lady Wildcats met their weakest  opponent of the season. With a final score of 66-8 and the teams leading scorer Sydney Wells out with a knee injury this game was never even a contest. The Lady Cats scored at will took the ball from Lagrange at will and utterly  annihilated their opponent.

The entire roster saw significant playing time in the drubbing. The lady Cats draw a tougher opponent  in Brentwood Academy on Friday night. Leading the scoring for the ladies was Parker Krause with 16 points  followed by Claire McGarr with 11 and Taylor Milani adding 10 in the win. Actually all the girls scored and the defense was just completely overwhelming to LaGrange. The McGarr Sisters Claire and Mary Margaret dominated the boards with 12 or more rebounds and Krause  had 5 steals along with Kaylee Moore who had 4. The Lady Cats will face much stiffer foe Friday in the Elite 8 in Cordele at 6:00pm.

In boys action on Wednesday night the Wildcats held on to a late surging Bethlehem Temple to win 78 to 72.  “We have a young team and they are playing well and they let them back into it late in the game,” said Coach Kennedy.

The Wildcats carried a 10 point lead into halftime up 32-22. They also at one time went up by 18 points. As a team the Cats shot 63% from the line making 17 out 24 in the 4th quarter. Bobby Ray Mitchell led the Cats in scoring with 32 followed by Ravi Patel with 17.Kennedy added,” we have talent we need to keep on working to get better.” The Wildcats play Saturday at 4:30pm in Macon at Windsor Academy the defending State Champions in the elite *. 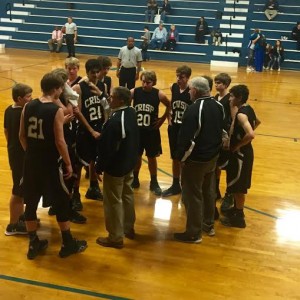