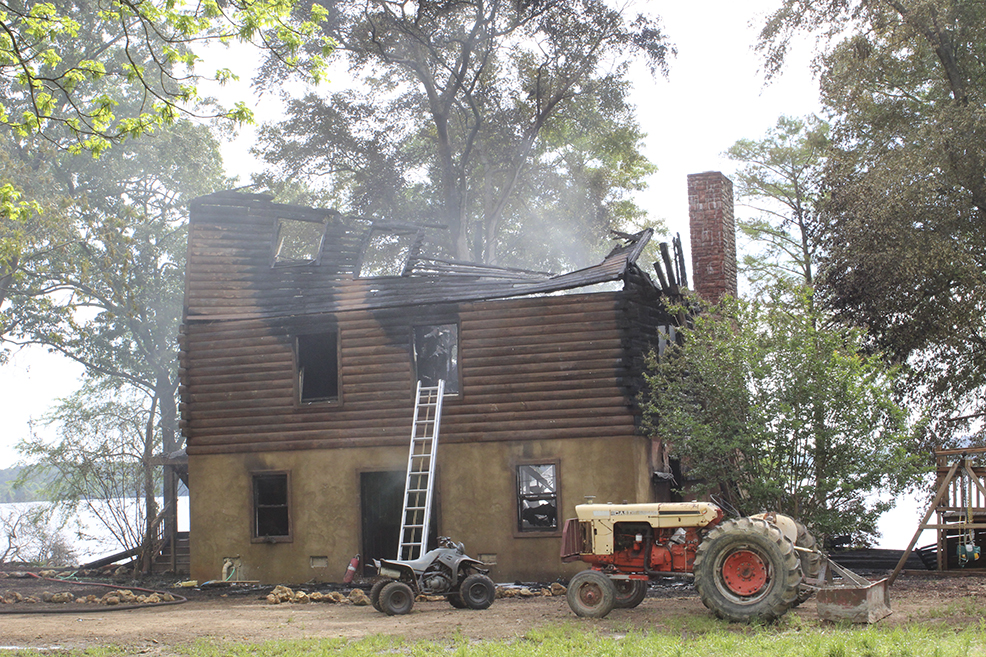 COBB — A local family lost everything, including two beloved pets in an early morning house fire at Lake Blackshear.
Crisp County Fire and Rescue personnel were called to assist with the blaze that broke out on the Sumter County side of the Hwy 280 Bridge at 191 Culpepper Road.
Chief John Ekaitis of Sumter County Fire & Rescue  (SCFR) told the Americus Times-Recorder that they were notified at 3:51 a.m. of a structure fire at the residence. The Lake Blackshear fire station is only about a mile from the fire scene, he said.
Upon arrival, three minutes later, fire personnel from SCFR, Leslie Volunteer Fire Department, and Crisp County Fire Department fought the flames, which had consumed some 75 percent of the house upon their arrival, according to the chief. Meanwhile, Goldstar EMS and the Sumter County Sheriff’s Office stood by.
Ekaitis said that three engines, two tankers and total of 28 firefighters battled the fire and it was brought under control in an hour and 10 minutes. He said it was a total loss.
The cause of the fire was unknown, but Ekaitis said a SCFR investigator was on the scene Friday morning.
Residents Zackary and Jessi Wade were home with their two daughters, ages six and eight, and four dogs when the fire broke out. The fire broke out on the deck of the home and they said the sound of the flames awakened them. The couple escaped the the home with their daughters and two dogs. Mr. Wade re-entered the home in an attempt to save the other two dogs. The dogs had run into a bedroom and he could not get to them. Belle, a Chihuahua approximately 5-years old and Brooklyn, a Dachshund less than a year old perished in the blaze and Mr. Wade was treated for smoke inhalation as a result of his efforts to save two of the furry members of their family. The couple had lived in the 2,000 sq. ft. home for 12 years.