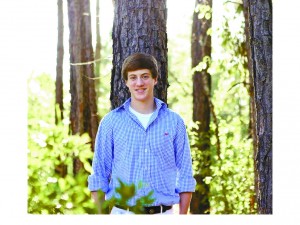 Joseph is doing really well.  He is going to therapy 3 days a week at Southwest Ga Rehab.  His main goal right now is to run again.  His neurosurgeon, Dr. Kim Johnston, in Macon released him to do lite sports and today he with the football team for the 1st day of summer practice.  Felton has made it very clear that Joseph is still on the team and will be participating in some way this fall.

Joseph was also able to show his hog at the annual steer and barrow show.    He was honored at the annual football banquet.  This year they started the Joseph Stokes Courage award.  It was given to Will Carter.  He also participated with the varsity baseball team this year and earned his bar for his letterman.

On April 7, Joseph spoke to Kiwanis about his accident and recovery.  He expressed a lot of gratitude to the community for all their support.  My favorite thing he said when he was speaking was “God made something good from my poor decision of not wearing a seatbelt”  (he could have been possibly crushed when the tire went through the windshield)

He finished the school year on track and is ready for his senior year.  The weekend of June 24 he will be participating in Project Rollway, an annual fashion show at Shepherd Center in Atlanta.  This is a fundraising event for the center’s adolescent rehabilitation program.  He has also started driving again.

Joseph and his entire family are still very humbled and overwhelmed by everyone’s support.  Not every day is easy.  Joseph has so much to be thankful for and he is.  But everyday there are new hurdles.  Of course there are days that Joseph does not see the big picture but that is why his family and friends are there by his side.