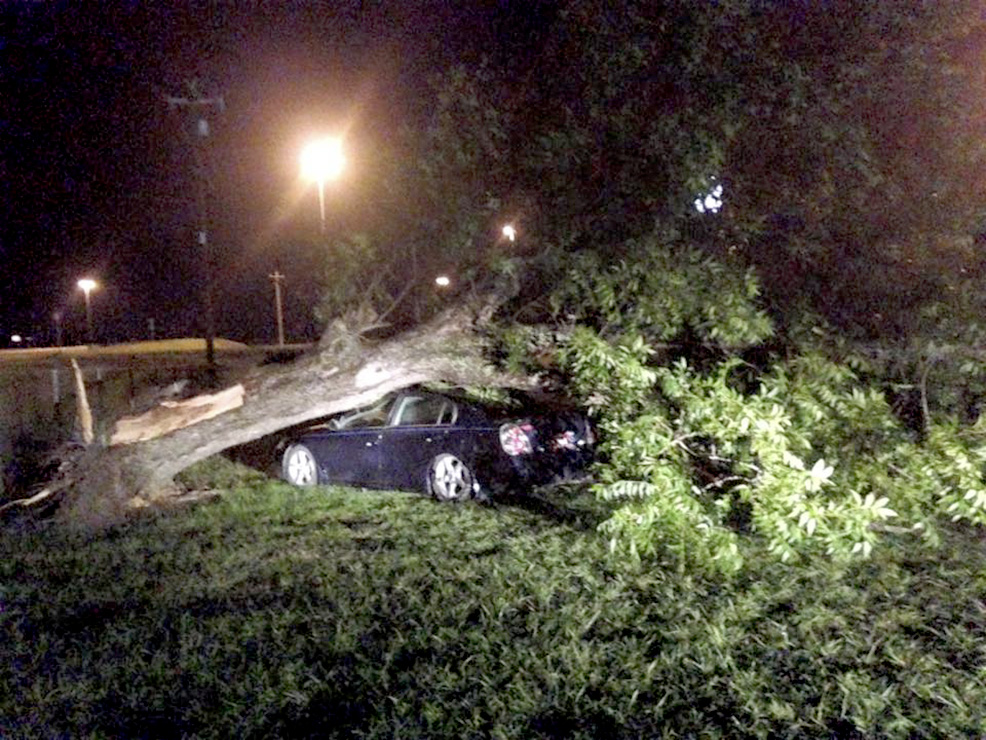 This above photograph, taken from the Crisp County Sheriff’s Office Facebook page, shows a tree blown over onto a car by Friday night’s storm.

CORDELE — Friday night was considered the night the lights went out in Cordele after a high-wind producing storm crashed through leaving significant damage in its wake.

On June 17, 2016, Crisp County Emergency Management assisted with numerous calls for service within Crisp County due to wind damage. Crisp County E-911 was inundated with numerous calls for service due to power outages and debris in the roadways. Five homes were affected with one being destroyed, two major damaged, and two affected. Several cars were damaged due to debris, as well as the local railroad being blocked due to debris. The railroad debris was due to the roof being blown off of the storage building nearby.  The local community was affected by at least 7 traffic lights being out, over 20 roads with major debris, and numerous power lines and poles being damaged. Crisp County Power and Georgia Power worked throughout the night and the next day to restore power.  Deputies were utilized throughout the event for road safety, including the need to detour citizens for an extended period of time on Farmer’s Market Rd.

In a later interview Hancock said the damage was over between 8:45 p.m. and 9:10 p.m. and after that the rest of night and next day were recovery.

“Public works, Crisp County Power did an excellent job and stayed on top of things to get power restored,” said Hancock. “The National Weather Service estimated wind at 57 mph in the north end of the county. At the office we estimated 40 mph. We already had extra personnel on duty due to a road check we were instigating so we moved those over to storm detail.”

Steve Rentfrow, General Manager of Crisp County Power Commission said he is pleased with the way everyone worked together.

“We always appreciate the 911 dispatchers, police department and sheriff’s office,” he said. “We had about 16 people in the field that worked over 24 hours. It was a very strong storm. The wind alone snapped multiple poles on Farmers Market Road which had to be shipped from Atlanta and were replaced on Sunday.”

Col. Lewis Greene, interim police chief said that most of the damage was in the county, but the city did see some trees down and debris blown around. One of the biggest issues for the city was the power outage which took out traffic lights down 16th Avenue.

“We called everyone in and set up traffic control,” he said. “We worked with Crisp County Power and the city to make sure they had assistance to handle the situation. Everyone worked together.”