Where are they Now: Frankie Lemmons

In 1975 and 1976 Cougars fans didn’t have a lot to cheer about the football teams were bad and the baseball teams were just average, but basketball was a different story.

The Cougars were a powerhouse in them days going 17-9 in 1975-76 campaign and 20 and 7 in 76-77. The main reason was a guy named Frankie C. Lemmons. Frankie had been playing basketball all of his life but didn’t start organized ball till he was in the 8th grade, by the time Frankie was in the 9th grade he was averaging 16 points a game. Frankie kept growing and getting better and by the time he was in the 10th grade he was promoted to varsity as a starter averaging 9 points a game. In the winter of 1975 Frankie would be tasked with the leadership roll of the team playing guard and forward. Frankie averaged 18 points a game that season and was voted “MVP” that year. Then in Frankie’s senior year Coach Frank Smith’s team put it all together and made a run to the state quarterfinals with a 20-7 record. The Cougars lost out to eventual state champions LaGrange. I myself can vividly remember that season as I attended many basketball games.

“An Outstanding player on the court and a great guy to be around,” said Dooly County Head football coach and former teammate Jimmy Hughes.

That year Frankie was again voted as the team MVP and he was also chosen to play in the North-South All star team in Atlanta, Ga. Adding to Frankie’s All region status was the fact he was chosen as the 1 AAA player of the year. As some may know Crisp County competed in the same region in those years as Valdosta, Tift and Moultrie so there were no easy nights.” Frankie was an absolute pleasure to coach, always gave you 100% and a perfect attitude,” said Former Head Coach Frank Smith. “If there had been a 3 point line in 1977 I can’t even imagine how many points Frankie would have had,” Coach Smith further stated. Frankie would garner more accolades at camps and was recruited by just about everybody around he decided on Jacksonville State University in Jacksonville, Fla. Frankie graduated Crisp County High in 1977 and headed of to college in the Sunshine state.

After an injury  prone career in college Frankie Graduated with a Bachelor in Health and Physical Education with a minor in Business. Frankie would meet and marry the former Merlissia Chapman of Jonesboro and they have 4 children Kakola M. Adams Lemmons, Ashley S. Lemmons, Karene Y. Lemmons and Amessia S. Chapman. And 4 grandchildren Mekih, Jilon, Dez and Trinitey. Frankie recently retired from Sara Lee after 25 years in sales. “That game against LaGrange in the quarterfinals of state clearly resonates in my mind even to this day,” said Frankie. “As a kid growing up in Cordele, I always loved playing basketball with the older guys.” ”It made me play much harder and I developed a passion and drive to be the best I could be,” Frankie expounded. Frankie still travels back to Cordele often to visit his parents and see some of the home folks. As of right now he is just enjoying retirement.

I will always remember when I was in middle school going to high school basketball games and watching Frankie and his teammates, Tommy Lewis, Jimmy Hughes and Leonard Daniels play it was always a good show. So in chapter “77” of the book of Cougars pencil in the name Frankie Lemmons. A shooter, player and all around good guy who became a “Cougar” legend. So let it be written so let it be done! 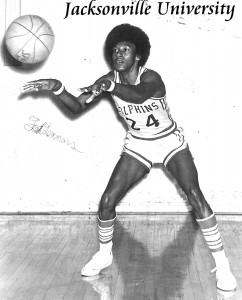 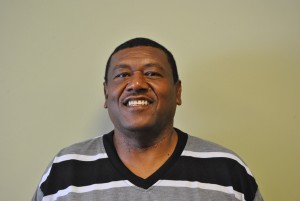 3 Winners of the Alfonzo Dennard Scholarship