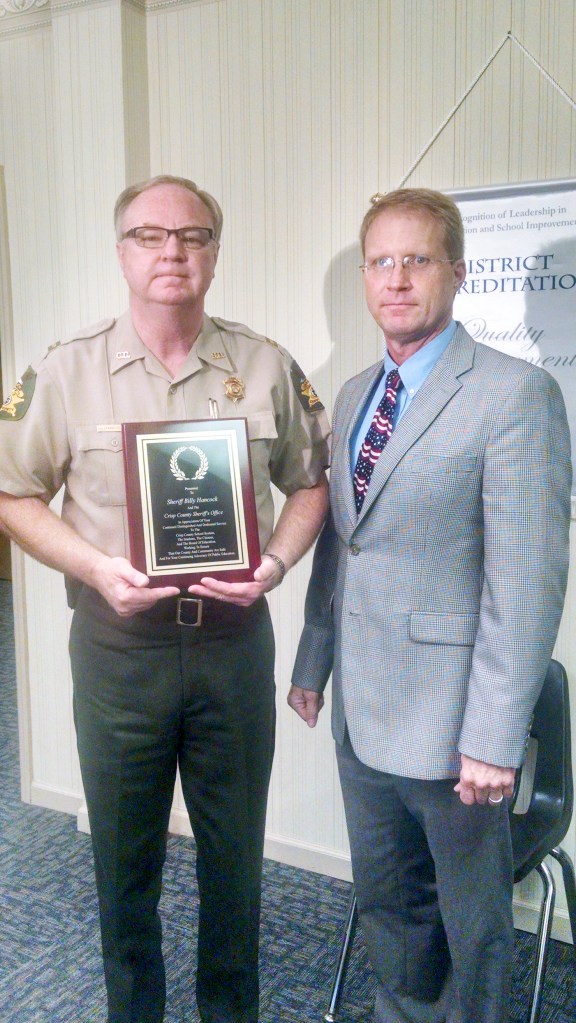 CORDELE — During their regular meeting Tuesday, Crisp County Board of Education honored Sheriff Billy Hancock for his service to the school system and the children of Crisp County.

“We count on a lot of people, many not in our school system to be a success,” said BOE Chairman Scott Forehand. “We are fortunate to have the most cooperative sheriff’s office out of the rest of the counties in Georgia and probably the country. He does a lot for our school system.”

A short video was played honoring Hancock where faculty, staff and even some students thanked the sheriff for all he does. Forehand then presented Hancock with a plaque on behalf of the board.

“Thank you for this honor,” said Hancock. “We are going to keep doing all that we can for the schools in Crisp County.”

Following the presentation the board moved into the action portion of their agenda. Board members approved collectively among those items were field trips from Crisp County High School FFA, DECA, and Skills USA, as well s the CCHS Wrestling team and the CCHS Band.

Superintendent David Mims presented the board with a recommendation to accept a bid for air condition units for the Crisp County Middle School cafeteria. According to Mims two bids were presented and the low bid came from SafeAire for the amount of $25,589 which will be paid out of Special Local Option Sales Tax Funds (SPLOST). The board approved acceptance of the bid. Mims also presented a recommendation for the purchase of a storage building to be placed at the soccer complex which is needed to house equipment. Mims informed the board they had received three bids and the low bid there came from Pettis Tire Company for $5,643. That bid was also approved by the board.

BOE members also approved a Radio System Agreement which is an intergovernmental agreement with the county. The school system will be getting new radios and equipment at no additional cost. Mims then presented board members with a recommendation to move forward with the Federal Perkins Grant application. The grant funds will be used for the CTAE program. This is an annual agreement. The board approved the motion unanimously. They also unanimously approved a list of personnel recommendations for the month of September.

No board members had any items to warrant entering into an executive session. Dr. Mims reminded board members of several upcoming events including a Work session at 3 p.m. on September 29, the next board meeting which will be held on October 4 at 5 p.m. He informed board members that October 7 will be a planning day with no school for students and October 10-11 will be fall break/Columbus day holiday.