The Wilcox Patriots jumped into the win column Friday night up in Cochran with 33- 21 win over AA Bleckley County. The Patriots came out swinging early in the rounds 1 and 2. Going up 21 to 14 at halftime. With 10 minutes to go in the first quarter #15 Ta’Corian Hunlen ran 4 yards for the first touchdown and the PAT by Landon Ledford was good and Wilcox was up 7-0. Then with 55 seconds to go in the 1st quarter #14 Desmond Tisdol ran for 2 yards for a second Wilcox touchdown, the two point conversion run by Hunlen was good and the Patriots were up 15-0. Wilcox wasn’t finished as with 9:20 to go in the half Hunlen made another 4 yard for a touchdown and the PAT was no good and Wilcox was up by 3 scores.

Bleckley did bounce back some as they scored on a break out 18 yard run and the PAT was successful and then with just 13 seconds left in the half the Royals quarterback Mika Floyd hit their receiver Simmons on a  13 yard pass and closed the gap to 21-14 at the half. In the second half both teams exchanged punts and stayed out of the end zone. Early in the 4th quarter however, Hunlen threw a 23 yard strike to Markese Love for a touchdown the PAT failed and the score stood 27-14.Bleckley bounced back again with another touchdown strike between Floyd and Simmons for 9 yards and a good PAT got the home team back to within 6 points. The Patriots added another score in less than 2 minutes and with 3:50 minutes to go in the game the Patriots enjoyed a two-touchdown lead.

“The difference for us tonight was we finished the drill on offense, we have moved the ball pretty well so far this year but missed the end zone, this time we hit it,” said Head Coach Mark Ledford. “ I am proud of the boys resiliency bouncing back from two losses especially the game last week, they showed character.” On defense the Patriots had a few standouts with Gage Reed leading with 6 tackles and Desmond Tisdol, Larry Pierce, and Elijah Howard all with 5 tackles and Howard had 2 pass break ups as well. Wilcox travels down to Lakeland, Ga. this Friday to take on the Lanier County Bulldogs. 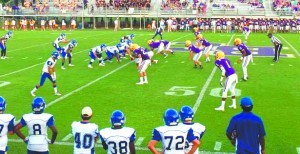