Crisp “blows” the Rutland Hurricanes away

49-14, seriously folks it could have been 77-0 just as easy. The Crisp County Cougars started off scoring touchdowns and 7 different players scored  touchdowns.  After taking over at their on 10 yard line the pitch left to D.J. Smith resulted in a 90 yard untouched touchdown and the route was on. Next up for the Cougars was Jammie Robinson who carried one in from 4 yards out for a touchdown and the score after the 2nd Brandon Thompson PAT was good was 14-0 with six minutes left in the 1st quarter. The third touchdown was a Patrick Felton 40 yard pass to Quay Walker who strolled down the sideline to score. The PAT was blocked and the Cougars led 20-0.

Miles Napier came in at quarterback and after several successful runs plunged in from 2 yards out. Napier hit Smith with a 3-yard pass for a two-point conversion and the Cougars were up 28-0. The Rutland Hurricanes were really not able to get any offense generated and their punting was poor most of the night. The 5th touchdown of the night was a 51-yard pass from Napier to T.J. Ming and the PAT was good and the score stood at 35-0. By this point in the game at midway through the 3rd quarter the Cougars were busy with getting in substitutes to gain experience. It was at this point that #20 Dakevian Thomas broke out on a 78-yard blast to score and with the good PAT the score was 42-0. Finally in the early 4th quarter # 18 Adam Posey who was in at quarterback plunged in from 10 yards out and the score after the Thompson PAT was 49-0. The Hurricanes were allowed two late touchdowns against mostly freshmen.

” It was great to get everyone on the roster in the game,” said Head Coach Shelton Felton. “ I was proud of the crowd support from Crisp County, it is great for the kids to see the fans in the stands.” The Cougars are now 4-0 for the first time since 2001 and are preparing for another travel date to Columbus, GA. next week to play Spencer of Columbus. This will be the first ever match up  between the Greenwave Owls and the Cougars. 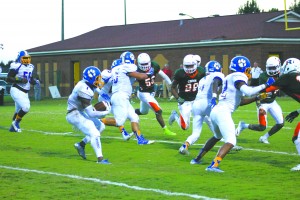 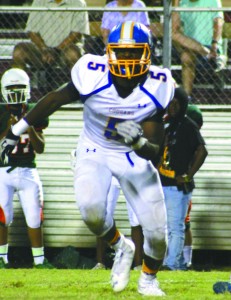