Bo Lawson looks like a right-handed gunslinger that can run like a gazelle. On Friday night over at “Bobby Gentry “ stadium in Hawkinsville him and his compadre’s did something to the Red Devils that don’t happen over there ever, they smoked them bad 53-7!

After having a touchdown called back and some costly penalties, the Bobcats gave a long hanging bomb to Hawkinsville or in other words a “MOSSING” and a 7-0 Red Devil lead. The embarrassment of that series lead the Bobcats to start playing ball and the scoring fest was on. With 3:01 to go in the 1st quarter John Clayton scored on a 15 yard tote and Juan Gonzalez toed the extra point to make the score 7 to 7. In the 2nd quarter Stevie Rhodes hit the pay dirt on 1-yard plunge and the PAT was blocked and Dooly was up 13-7. After holding Hawkinsville again the Bobcats got the ball again and scored on another Clayton 4 yard carry the PAT was good and the Bobcats moved to 20-7. Then with seconds left in the first half Bo Lawson who had already thrown numerous darts and ran for 70 or 80 yards found Jarquavius “ball hog” Brown for a 5 yard touchdown and the Bobcats took a 26-7 lead into halftime.

The nightmare got worse for the Red Devils because they had to kick off to Dooly to start the second half. After a few passes and runs Stevie Rhodes got the ball and scampered 39 yards for another Bobcat touchdown, the PAT was good and the route was on 32-7. Next up was 47-yard bomb from Lawson to #9 Josten McGhee to the 33 yard line and then Rhodes once again banged it in from 20 yards out and the score was Dooly 39 Hawkinsville 7. It was bound to happen again as it has already happened several times this year, Lawson found his older brother wide receiver Dre Lawson for a 20 yard strike and Dooly was cruising at 46 to 7. Finally after getting the ball on a fumbled Hawkinsville kick off Dooly got another great run out of the Sophomore QB as he maneuvered 20 yards for the final Dooly touchdown. The running clock rule was implemented and Dooly was substituting. “I thought the boys played pretty well in all phases of the game, after making some early mistakes that led to a Hawkinsville score they calmed down and took control,” said Head Coach Jimmy Hughes. “Hawkinsville has a very young team and they played hard but the guys are starting to gel and I was pleased with the effort, “ Hughes added. “I was also glad we was able to get a lot of kids into tonight’s game.” Dooly will host Crawford County in the “Grove” next Friday at 7:30pm. 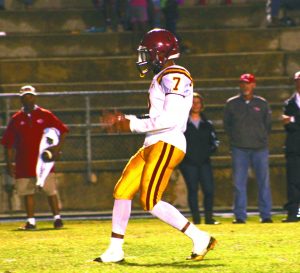 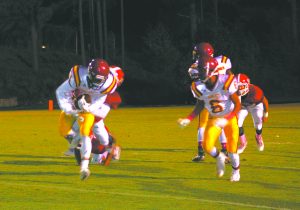 Cougar Homecoming was a Blast