The Fullington Trojans started off average and then the wheels came off in the second half as they lost Friday’s game to Skipstone 41-7. Down by only six points at halftime 13-7. The Trojans could not get anything going in the second half and the Skipstone Warriors reeled off twenty eight unanswered points to beat Fullington. The loss drops Fullington to 5 and 2 on the year and 1-1 in region play and Skipstone moves to 6-0 on the year. “We have got to do a better job of focusing on the little things, if you execute those things right everything usually falls into place,” said Head Coach Jason Hurst. “I just don’t know where we were at Friday night.”

Lane Mitcham led the offense with 52 yards rushing and 40 yards receiving followed by Sam Evans with 5 catches for 49 yards and Will Mashburn was 8 for 23 for 114 yards passing. On defense Thomas Kenton, Houston Hawkins and Nick Arzola led the charge. 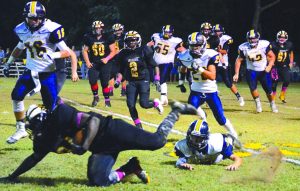 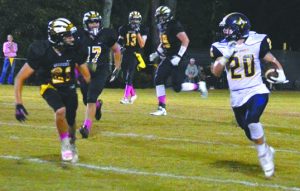