December 29,  2016
Girls:
FA 46  CGA 15
Scoring:  Leading Scorer – Lauren McIntyre – 22
Mackenzie Rogers-2, McIntyre-22, Mashburn-2, Musselwhite-6, Coley-3, Sanders-1, Tyndal-2, Claire Thompson-1, Wall-7
We jumped out to an early lead thanks to our press that lead to open looks in transition.  We led 13-2 after 1, 24-6 at the half.  We went mostly  with man and some zone half court defense in the second half and built up a lead of 39-9 after 3.  This allowed our bench to get a lot of valuable playing time and rested our starters legs for the championship game tomorrow night.

Boys:
FA 61  CGA 56
Scoring:  Leading Scorer- Griffin West – 19; Will Mashburn – 16
Harvey-6, West-19, Mashburn-16, Evans-8, Tyndal-6, McKinney-6
This game went much like the girls game as we jumped out to an early lead behind our press and pressure.   We led 17-13; 31-22, and 50-37 after the first three
quarters. We increased the lead in the 4th and got some playing time for our bench.  Although late in the game they did foul us and we missed several free throws and they made a Late run in the Game behind several 3’s to make the game appear closer than it was. We still have to get more consistent from the free throw line but overall our play was much improved.

****Lauren McIntyre scored her 1000th career point at Fullington Academy tonight****
Girls:
FA 49    GA Christian 17
Scoring:  Leading Scorer – Grace Musselwhite – 14; Chantel Coley – 12; Lauren McIntyre – 12
Mackenzie Rogers-2, McIntyre-12; Musselwhite-14, Coley-12, Roberts-3, Claire Thompson-2, Wall-2, Sarah Beth Thompson-2
Once again we were able to disrupt the opposing team with our press and half court pressure defenses.  It continues to fuel our offense allowing us to jump out to first quarter leads. We went up 16-0 in the first quarter of this game. In Second Quarter Action When Lauren McIntyre scored her 1000th career point.  The team and Trojan fan base was able to show their appreciation of the moment and she was awarded the game ball at that time.  We led at the half 29-5 and after three 44-12.  We were able to empty the bench in the 4th and allow all our kids to get some court time in a championship game.  This was one of our most
complete games of the year and hopefully sets us moving in the right direction as we enter region play in a couple of weeks.
**Lauren McIntyre, Chantel Coley, and Grace Musselwhite recieved All-Tournament team awards.
Boys:
FA  60   Sherwood  64
Scoring:  Leading Scorer:  Griffin West – 19;  Breyer Tyndal – 15; Jaden Harvey – 12
Harvey-12, West-19, Mashburn-2, Evans-8, Tyndal-15, Miller-4
This was one of the best games we have played all year.  I must say that i think Sherwood is the best team we have seen so far this year much improved since the first game of the year but we have improved as well.  I don’t think either team led by more than 5 points at any time during this game.  It just came down to the last couple of possessions and they was able to score and we didn’t.  We did A great job on the boards to hold them to just a few second chances and we contested just about every shot.  We led after one 19-1 and it was tied at the half 30-30. We trailed after three 40-44 and we led with A minute to go 60-59. To Their credit they came down and hit a 15  foot contested jump shot to take a 61-60 lead that we could not overcome.  We got a couple of looks but just didn’t hit the shots.  I know it had to be a great
game to watch if you are a fan of basketball.
**Griffin West and Breyer Tyndal received All-Tournament team awards. 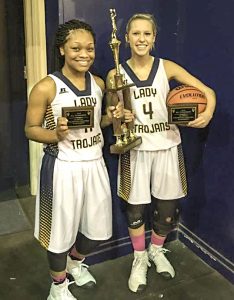