In just a little over 24 hours, two families had their lives turned topsy turvy due to the ravages of fire.  The home of Michael and Kayla  Powell, shown above, caught fire during the wee 3:00ish a.m. hours on Sunday, January 8.  According to Kayla Powell, her husband awoke around 3:30 a.m. to what he thought were gunshots and upon peering out their bedroom window, he realized that their house was engulfed in flames.  As soon as they opened their bedroom door, smoke streamed in.  Michael’s brother was in the house and the couple got to him to awaken him, then they all began to look for a way out of the house.  After realizing that the two front doors were unaccessible, they were able to exit through sliding doors located at the middle of the house.  Within seconds after being outside, they witnessed their bedrooms go up in flames.  Walking around the house to get to the road, they saw that their three vehicles had already been destroyed by the fire.  Kayla and Michael Powell, who are expecting a daughter in June, lost absolutely everything, including their beloved dog.  They all barely escaped with just the clothes on their backs.  A Go Fund Me Account has been established in the name of “Devastating House Fire” and any amount of monetary donation will be greatly and fully appreciated. 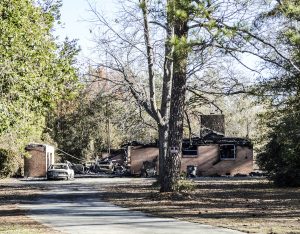