On Thursday night at Crisp County High the Lovett Lions as a school got bit of revenge on Crisp County High when they beat the Cougars 71-69 in the 2nd round of the state playoffs. Anyone watching the game would have to take their hat off to the Lions, as they were most certainly a disciplined team in their passing attack and they had several very good outside shooters. The Cougars fell behind early and spent most of the night playing catch up. Down 15-10 at the end of 1 period of play the Cougars defense was allowing a number long shots and whenever the Lions went to the line, they didn’t miss very often. The Cougars fell further behind going into halftime down 34-24.

The second half saw the real Cougars step forward as they moved the ball around better and took good shots and closed the gap down to 2 points and were down 46-44 after the 3rd stanza. In the fourth the Cougars tied it up but Lovett was also relentless and kept up the pressure. When Quentavious Dean banged in a 3 pointer with about 4 minutes to go and tied the game up the crowd erupted, as we knew we had a shot at the game. Ijon Owens drove the lane several times and made some clutch baskets and was also fouled and poured in points from the line. At the very end though with seconds remaining on the clock the Cougars got the ball down by a score drove down the court and missed a scoring opportunity. Unfortunately, Lovett grabbed the rebound and secured the win. “ Like I have said all year this team has a ton of guts and even when they were down they fought back against a good team but this time we came up just short, “ said Head Coach Stacey Stephens. “I am really proud of these guys and their determination, they never quit.” “Also you have got to give Lovett their due they played good disciplined ball all night,” Stephens added. The stats were not available but the scoring was lead by Owens and Dean and the rebounds belong to Quay Walker and Valdis Daniels. 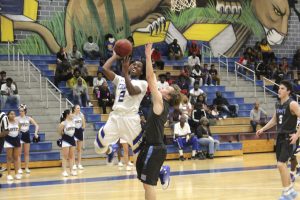 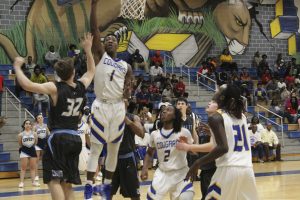 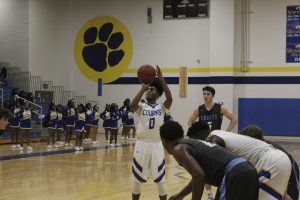