Within the last week and a half, Sheriff Hancock, the drug task force and traffic division of Crisp County Sheriff’s office have made multiple misdemeanor and felony drug arrests. While out on patrol last Friday night, Sheriff Hancock made a felony possession of methamphetamine with intent to distribute arrest. The following week Deputies within the traffic division made five misdemeanor possession of marijuana charges, one underage alcohol possession arrest and multiple traffic citations. They also recovered numerous pipes commonly used for smoking illegal narcotics, scales, sometimes used when dealing with illegal narcotics and other drug paraphernalia. Our Deputies are working diligently to keep our highways safe and vehicle crashes to a minimum. Ending the week, agents with the Mid South Narcotics Task Force served a search warrant on a local business. Agents had received multiple complaints about the area located at 504 West 14th Avenue and started an investigation. Several individuals were present when the search was conducted. Agents recovered approximately 59 pieces of crack cocaine and 74 hydrocodone tablets. Also seized were two semi-automatic pistols and a 16 gauge shotgun. The offenders were charged with possession of cocaine with intent to distribute and possession of hydrocodone with the intent to distribute. We will continue to take information from anonymous callers and use it to investigate and be proactive in keeping drugs off the streets in our community, therefore making it a safer place to live and work. As Sheriff Hancock has said before, “If you See Something, Say Something.” Drug investigations are not completed over night, however, we take every call very seriously and appreciate the information our citizens are willing to provide. 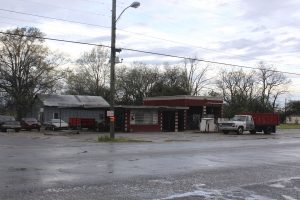