Arrest Charges Include Cruelty To Children

Sheriff Rodgers received information that Narcotics were going to be dropped off at the Wilcox County Jail.

At approximately 7:15 p.m., Sheriff Rodgers along with Deputy Chris Rimes witnessed a white Chevrolet Sonic drive onto the property of the Wilcox County Jail. The female driver, who was identified as Bourdeau, made the drop.

Sheriff Rodgers made a traffic stop on the vehicle while Deputy Rimes retrieved the package.  Sheriff Rodgers arrested Bourdeau and the passenger, who was identified as Emory Stewart.

The package contained several cigarettes along with an amount of suspected methamphetamine. 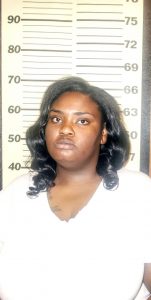