I took on Parris Island 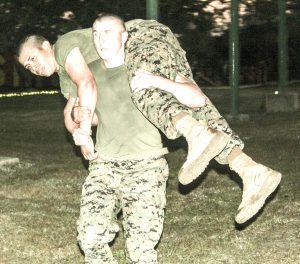 Somewhere around the 8th week of training at Parris Island, recruits begin to feel – well – almost human again. The Senior Drill Instructor and the other DI’s began a mentoring phase in their relationship to the recruits. Now, don’t get the wrong impression, they aren’t holding hands and singing Kumbaya.  The “Kill Hats” are still grilling the recruits morning, noon, and night. They are being taught and indoctrinated to a whole new life many had no idea even existed. Remember, Marine Corps training is essentially tearing down the individual, only to rebuild a team member. That rebuilding really gets started in Phase Three (Mentoring).

As I mentioned before, the Marines took my group everywhere and allowed us to participate in numerous recruit activities. I learned by day two that I was no longer physically capable of being a Marine. We were out one morning before the sun rose watching recruits carry other recruits around on their shoulders, and then of course, we got up early to go see the MOTO run. That is the motivational run of four miles on family day and lots of people come out to see it. We also went to the rappelling tower, the gas chamber, and out to Marine Air Station Beaufort, S.C.  We didn’t actually get to do any boxing or pugil stick training, but we did watch as the recruits did and for some, it was the first time they had ever mixed it up in a fight.

One of the most exciting moments at Parris Island occurs on family day. That is the day before graduation.  There is almost always a group of one to 20 new Marines that are sworn in as American citizens. They have been granted their citizenship for service to the armed forces, and it is an amazing, hair-raising event to watch.  It is during phase three of boot camp that recruits are actually spoken to as human beings mainly by the Senior Drill Instructor, whose job is teaching and mentoring recruits. He has the ultimate responsibility for the development, safety, and education of the recruit.

As graduation day comes into view, there is one final test the recruits must pass to get off the island, the Crucible! This is a 54-hour event designed to test a recruits physical and mental stamina and their new found skill set they have learned while at training. It is a complete team function and upon successful completion of this event. They get to attend the famous and long awaited Eagle, Globe, and Anchor ceremony. It is at this point, they are declared to be Marines and yes, tears do flow. We were fortunate to get to witness part of this event.

As a special bonus for myself, I got to watch two of Crisp County’s own young men graduate. Landon Whitman and Caleb Hulett are two young men I watched grow up from childhood as they are my sons ages, they all played ball together, and have had long friendships.  Starting in December of 2013 when my nephew Cody Nobles left for the island, Crisp County has had six new recruits head to Parris Island – Nobles, Ashton Black, John Wright, Matt Wright, Whitman, and Hulett. In May, Travis Turner leaves, followed in August by Joshua Hulett.  That will be eight guys from our small town joining the United States Marine Corps, going in as recruits, coming out as Marines, and forever changed from the kids we once new.  I cannot put into words the pure pride I feel for all these guys!  The old saying is once a marine always a marine is really easy to see.

As I write this I think of the numerous men here in Cordele right now. Friends of mine that have been to Parris Island and now they are civilians, but they are very proud of their new “younger brothers” as they make this transformation. This was an awesome experience and the teachers and myself that attended are now in a better position to actually help explain to young men and women what their life in the Corps will be like.

Honor, courage, and commitment are core values of the Marine Corps. You all have heard the countless Marine sayings like Semper Fidelis (always faithful) or The Few, the Proud, The Marines.  Oh, and who can forget the famous “first to fight”. One thing all branches of service do is pick on the other branches of service, and the Marines get their fair share of it as well.  However, you can bet your last dollar when it gets down to our enemies-must-die time, it is the U.S. Marines that are sent to do that job.  These are extremely uncertain times now facing the American people and the countless dangers that are surfacing all over the world, lunatics like Kim Jong-un the idiot in North Korea or the evil President Bashar al-Assad of Syria, the Taliban, Al-Qaeda, ISIS, and many other lesser known but just as dangerous factions around the world.

More than ever, America must be one with our military.  Never allow it to be second to any.  Assure that our people have all the weapons and information at their disposal.  Stop the divisive tensions between political factions in our country and unite in a common cause, which is the unilateral and complete destruction of our enemies.  America should not have to be the “Police” of the Earth, but we are for if we don’t heavily militarized nations on earth with atrocious human rights records will take our place and no place on earth will be safe.

By divine right, I firmly believe that it is Americas calling to lead the people of this world if we are to be successful in this endeavor and bring about a lasting peace on Earth. We must follow the words of President Theodore Roosevelt “speak softly and carry a big stick.”  Only in this case, make that a few divisions of Marines!!!

If you are proud to be an American, then give me an Ooh-Rah!!!! Oh, and by all means, GOD BLESS THE USA! 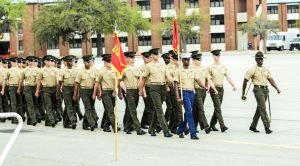 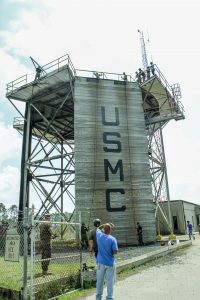