Sheriff Releases a Statement on Suspect

On May 9, 2017, the Crisp County Sheriff’s Office responded to the Sunrise Inn located at 2041 Hwy 41 North at approximately 10:30am in reference to a death investigation. The victim was identified as 68 year old, Duane Henry Brug from Florida. Investigators worked throughout the day and night. Early on, the investigation revealed that Brug had been residing in Cordele for the past 8 years and that 28 year old Bennie James Johnson was identified as the prime suspect. Sheriff Hancock and his deputies were determined to locate Johnson. At 11:15pm, Sheriff Hancock, Major Al Smith, Lt. Edwin Oliver, along with members of the Macon-Bibb Gang Task Force and Deputy Marshals with the fugitive squad located Bennie Johnson in a hotel room in Macon, Georgia. It is known that Johnson entered Brug’s residence and remained there for a short time. With assistance from a GBI crime scene technician, evidence and statements were gathered. This information revealed that an argument ensued between Johnson and Brug when Brug refused to give Johnson money. Johnson then stole Brug’s cellphone and Bank Debit Card as he left the residence. An autopsy was performed by the GBI Crime Lab. The autopsy revealed Brug succumbed to a cardiovascular event. Warrants were issued for Bennie James Johnson III of Cordele, for 1 count of Burglary and 2 counts Financial Transaction Card Fraud. It is unknown at this time whether the heart attack occurred during the altercation with Johnson or shortly after. The investigation into the time line continues with possibly more charges pending. Hancock extends his appreciation to the twenty-plus officers and staff as well as the assisting agencies that sacrificed their time and effort in this case. 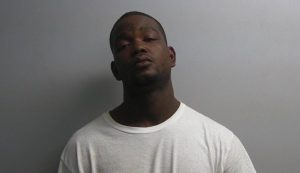