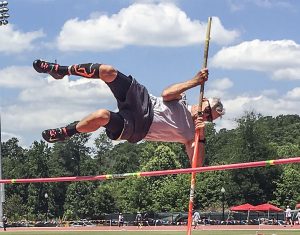 He’s three-quarters of a century old and continues to defy the odds of his age.  On Friday, June 9, Cook Holliday vaulted his way to become second in the nation for pole vaulting, age 75 -79, at the 30th National Senior Games held in Birmingham,  Alabama.  Additionally, he placed right behind the world record holder in this division.

Ever since he was born, Cook Holliday has lived up to his first name far and beyond.  He’s been hot in the athletic arena for as far back as one can remember.

Featured in a story in the Cordele Dispatch back in February 8, 2017, people will remember that Cook is a native of Wilcox County and a high school track and basketball star.

Since his young elementary days after reading a book about Olympian Jim Thorpe, Holliday has been cooking ever since and looks like there’s no stopping him.

Cook, who loves competing, also uses this path as an avenue to “keep his body in shape, leading a healthier life, and having fun.”

What lies ahead for Holliday?  Well, there’s still the gold and maybe one day, he might even become the world record holder.

Only time will tell and in the meantime, one thing is certain – Holliday will continue to cook!