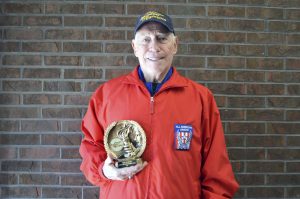 Jimmy Culpepper is no stranger to awards and accolades throughout the course of his career in coaching and athletics. But recently Culpepper was given an award that truly brought him to tears. He was awarded the Barney Ochs Sportsmanship Award by the Senior Olympics Board of Directors earlier this month.

“It has me dazzled. In 65 years of competing in athletics I have not found anything that means more to me than this award. I consider this the most significant accomplishment of my career in athletics,” Culpepper said.

That is truly saying something when considering his coaching career that spanned 50 years.

Culpepper went on to explain all of his success in the Golden Olympics.

“In my 11 years of competing in the games, I have won about 150 medals and been named an All-American in the discus throw, and those mean a lot to me. But anyone can accomplish these things. Not everyone can win a sportsmanship award such as this,” Culpepper said.

Culpepper likes to help out the other athletes when he sees that they can use some tips or encouragement and believes that has helped attribute to earning the sportsmanship award. “Normally the coach in me takes over out there. If I see someone that needs help with jumping or throwing form, I try to help them correct it,” Culpepper said.

In Culpepper’s 11 years of competing in the senior games, he has traveled all over the southern United States to events in cities such as Tallahassee, Houston and Winston Salem. Culpepper described the senior games as a way for many seniors to stay active and maintain good health.

“You realize that you can do some things that you did not think you could do, and that you have not regressed with age as much as you thought,” Culpepper said.

Culpepper is passionate about the games and has organized an event to take place in Cordele on March 24, 2018. The Cordele Senior Olympics will be called the Watermelon Capital Games. There will be 27 events that will include: 3-on-3 basketball, a free throw competition, beach volleyball, archery, bait casting, Wii Bowling, various track and field events, and swimming events.

Anyone 50 years of age and up can compete, and competitors will be divided up fairly amongst nine age groups such as: 50-54 years, 55-59, 60-64, 65-69 and so on. More details will be given when they are finalized, but Culpepper has high hopes for the event and believes that 300 participants at the games from the surrounding areas would be possible.