CORDELE- The Crisp County basketball teams finished up their home region schedule on Friday night when they hosted rival Worth County. The teams split the games, with Worth winning the girls’ game and Crisp taking the boys’ contest.

Jelissa Reese scored nine points in the first quarter to help the Lady Cougars to a 13-12 lead at the end of the period.

The Lady Cougars used a strong third quarter to retake the lead, as they outscored Worth 17-11 in the period. Jelissa Reese scored 13 of the 17 Crisp points in the quarter, while Diamond King and Alexis Henderson added a bucket apiece. The Lady Cougars led 38-35 entering the fourth quarter.

A 7-0 run by the Lady Rams put them ahead 46-41 with just over three-minutes remaining in the game. Reese scored shortly after to pull the Lady Cougars back within three points of the lead, but Worth County knocked down a couple of free throws to pull back ahead by five.

Hardemon knocked down two crucial three-pointers to lead the Lady Cougars on a 9-2 scoring run late in the fourth quarter. The run tied the score with about a minute to play in the game, but Worth County was able to knock down a few free throws to escape with the road win by a final score of 55-52.

Jelissa Reese finished the game with 26 points, eight rebounds and three assists. Aaliyah Hardemon ended up with her season-high in points with 15 in the game. Diamond King grabbed 17 rebounds and scored four points.

The Cougars then outscored Worth 14-9 in the second quarter. Chambliss, Harvey, Armstrong, TJ Ming, and PJ Coleman all scored for Crisp County in the period. The Cougars led 22-18 at halftime.

The teams traded buckets and small scoring runs throughout the third quarter. KJ Williams and TJ Ming each had four points in the quarter for the Cougars, while Trey Griffin, Armstrong and Chambliss added two apiece. Worth County scored at the buzzer, but the Cougars led 36-30 going into the final quarter.

Worth County used some small scoring runs to cut into the Cougar lead, but Ming and Chambliss had strong fourth quarters to help keep Crisp County in front. The two combined for 12 of the 16 Crisp points in the period, with Armstrong and Harvey pitching in with a bucket apiece.

Ming knocked down a free throw with just a few seconds left to put the Cougars ahead by three, and they were able to put the game away with a defensive stop. Crisp County picked up the region win by a final score of 52-49.

Chambliss led the Cougars with 13 points in the game. Ming and Armstrong were also in double-digits, with 11 and 10 points respectively. 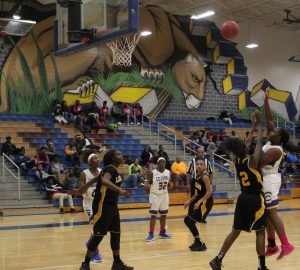 Janiah White attempts a shot for the Lady Cougars. 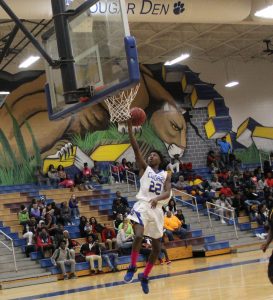 Bread Armstrong scores for the Cougars. 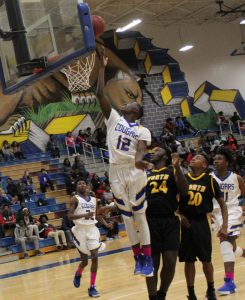 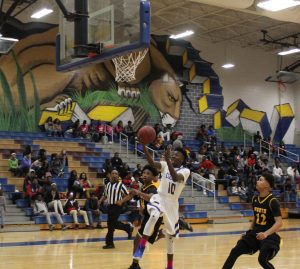 KJ Williams beats the defense for a score.