SYLVESTER- The Crisp County Cougars and Lady Cougars traveled to Sylvester on Tuesday night to play in the first round of the region 1-AAA tournament. The winners of the games clinched spots in the region semifinals, and in the GHSA AAA state playoffs. Worth County came up with the win to end the Lady Cougars’ season, while the Cougars defeated the Rams to keep their season alive.

The first quarter of the girls’ game was very physical and defensive. The Lady Rams jumped out to a 6-0 lead to start before Alexis Henderson and Diamond King each scored for the Lady Cougars. Worth closed the quarter by making several free throws and they led Crisp County 10-4 entering the second period.

The Lady Cougars closed the Worth County lead down to two points after scores by Jelissa Reese and Diamond King, but the Lady Rams subsequently went on a 14-0 run to take a 24-8 lead. E’lacious Holt scored the final points of the first half, but the Lady Cougars trailed 24-10 at halftime.

The game was far from over, however, as the Lady Cougars fought back from the 14-point deficit using a big third quarter. Reese led the third quarter charge for Crisp County with 15 points in the quarter, while Henderson and Janiah White added a bucket each. Worth County only managed to score eight points in the period, but they held onto a 32-29 lead at the end of the third quarter.

The Lady Rams stretched the lead back out to 11 after starting the final period on an 8-0 scoring run. Crisp continued to fight but Worth County was able to pull away, and they won by a final score of 53-37.

The loss ends a hard-fought season for the Lady Cougars, but they finished with twice as many wins this season compared to last. Jelissa Reese was the leading scorer in the game for the Lady Cougars with 23 total points. Other scorers: Alexis Henderson- 5 points, Diamond King- 3, Janiah White- 2, Aaliyah Hardeman-2, E’lacious Holt-2.

The Rams opened the scoring in the first quarter, but Crisp County scored six straight points on scores from TJ Ming, RJ Chambliss and Trey Griffin. Worth then knocked down two straight three-pointers to retake the lead. Alex Harvey scored the next five Cougar points, and Quay Walker made a layup late in the period to give the Cougars a 13-10 lead at the end of the first quarter.

Ty Mckenzie made a layup off of an offensive rebound to push the Cougar lead to 15-10 at the start of the second period. Worth County subsequently went on a 10-2 scoring run to take a three-point lead about halfway through the second quarter. The Cougars answered with a 10-2 scoring run of their own sparked by some great ball movement. Chambliss and KJ Williams each scored four points during the run, including a difficult reverse layup from both, and Bread Armstrong knocked down a couple of free throws for the other two points. The Rams scored the final points of the first half, but Crisp County had a 27-24 lead going into halftime.

Worth County started the second half with a 10-4 scoring run to take a 34-31 lead. Ming, Harvey and Chambliss each scored over the next couple of minutes during a 7-0 run that helped the Cougars retake the lead by four. Crisp then outscored the Rams 11-10 for the remainder of the third quarter, led by five points from PJ Coleman, and scores by Harvey, Walker and Chambliss. The Cougars led 49-44 at the end of the third quarter.

The Rams started the final period with an 11-6 scoring run to tie the score at 55 apiece with 4:55 left to play. A dunk by TJ Ming off of an assist from KJ Williams put the Cougars back in front 57-55 at the four-minute mark. Worth County scored the next four points to grab the lead by two.

Some great passing helped spark the Cougars to a crucial 8-0 scoring run over the next two minutes. Williams, Harvey and Chambliss all scored baskets during that stretch to help give Crisp County a 65-59 lead with 1:30 to play in the game.

Worth cut the Cougar lead back down to two points with less than a minute to go, but Williams, Harvey, Ming and Malik Hall all knocked down late free throws to finish the game off to put Crisp County into the region semifinals. The Cougars won by a final score of 72-66.

The Cougars will play in the region semifinal game against Cook County on Thursday night at 8:30 in Adel. The two squared off twice earlier this season with the home team winning very competitive games in both previous contests. 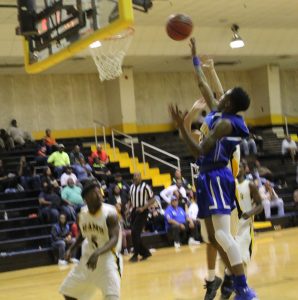 Alex Harvey floats a shot over a Worth County defender.