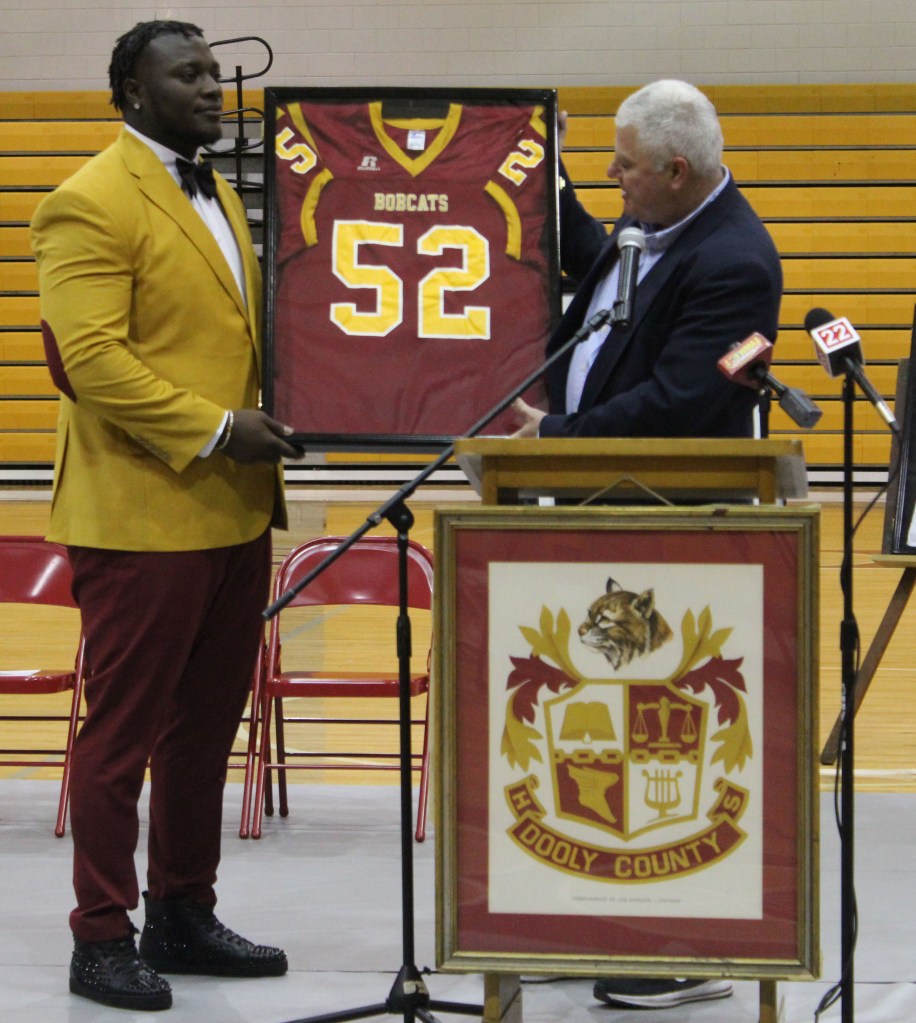 VIENNA- Current Green Bay Packer and graduate of Dooly County High School, Montravius Adams, was recognized for his achievements at a jersey retirement ceremony in his honor on Thursday morning, March 8. The program featured many of the prevalent people in Adams’ life to this point, including: coaches, teachers, family, and local Dooly County community members.

At the start of the ceremony, members of the Dooly County High JROTC program presented the colors, and Dooly County student Kayla Harrison sang the national anthem. Principal, Arney Bryant then welcomed everyone who was there to attend the occasion, and assistant principal, Dr. Bobbie J. King addressed the crowd and spoke briefly about the time Montravius spent within the Dooly County school system.

“Mon became one of those that you just can’t beat, because he would never give up,” said King. “He completed college, and stuck to his goals. And Dooly County would like to tell Mr. Montravius Adams thanks for allowing us to be a part of the success story.”

The Mayor of the city of Vienna, Hobby Stripling, made a proclamation on behalf of the city of Vienna, stating that March 8, 2018 was officially Montravius Adams Day. Dooly County Commissioner, David Barron, then spoke on behalf of the Dooly County Commissioners who also made it official that March 8, 2018 was to be remembered as Montravius Adams Day.

Montravius’ godfather, Adam Langley, subsequently shared some fond memories that he had made with Montravius.

“It’s not the tackles and the quarterback sacks, all that will be gone one day. But it’s your legacy and how you treat people,” said Langley. “I’m just so proud that he has not forgotten where he has come from. I’m not only proud of the Montravius Adams on the football field, but also the one off the field and the way he conducts himself in everyday life.”

“I know that all the coaches, players, and fans of Auburn are extremely proud of Montravius,” said Malzahn. “ We always talk about using your influence in a positive way… and Montravius did that since day one at Auburn. It’s not just about the football player, its about the person. And just from a coaching standpoint… you understand that that’s the most important part. We’re extremely proud of him, and the man he’s becoming. And just speaking for everybody at Auburn, we are just so proud of you, and we love you,” he added.

Ms. Jean Thompson spoke briefly next, and thanked Montravius on behalf of the Dooly County school system. After that, it was Montravius’ turn to address the crowd.

“There is just so much to say, and at this time I really can’t think of everything. It has been a long journey, its been great. Time really flies,” said Adams.

Montravius then reflected on his time at Dooly County before giving some inspirational words to the students in attendance.

Montravius finished up his time addressing the crowd by thanking all the important people in his life, and he concluded by reminding everyone in attendance of his kickball and softball play date he is putting on for the community at the Dooly County Rec Department tomorrow in Vienna starting at 11:00 a.m.

After Montravius finished up, Coach Hughes presented him with his retired number 52 jersey.

“Montravius Adams spent the majority of his time wearing number 52. And moving forward no one else will ever wear number 52 on the football field for Dooly County High School,” said Hughes. “We are retiring number 52 in honor of his accomplishments on and off the field, and we are giving him this jersey so that he can take it and do whatever he wants to with it.”

Jerseys worn by Montravius during his career at Auburn and for the Green Bay Packers will be put on display at Dooly County High School going forward as well.

“His Packer jersey and his Auburn jersey will be displayed here at the school. They will be a reminder of Montravius and his accomplishments moving forward,” Coach Hughes said.

Montravius’ high school sweetheart, LaTeisha Gray, and their son, Montravius Jr., were then recognized, and Montravius concluded his time speaking by thanking everyone for the effort they put into the event, as well as the roles they have played in his life.

“Everyone is not going to make Major League Baseball, or the NFL or NBA, but everyone can go and be a professional in some career field or aspiration,” he said. 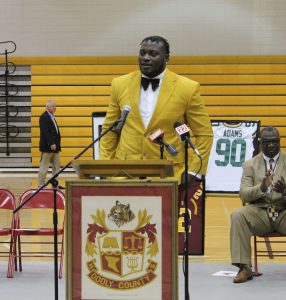 Montravius Adams speaking during the ceremony. 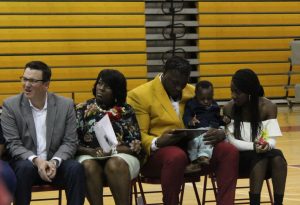 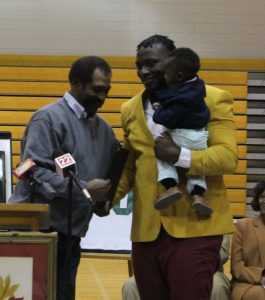 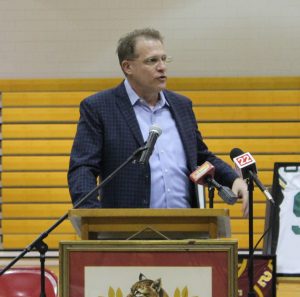 Gus Malzahn, Head football Coach at Auburn, was in attendance to speak about Montravius’ time as an Auburn Tiger. 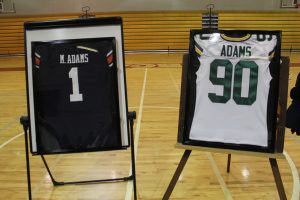 Jerseys from Montravius’ time with the Auburn Tigers and the Green Bay Packers that will be displayed at Dooly County High School.