ALBANY- The Crisp County High School track team had two athletes compete in the championship rounds at the GHSA AAA state meet over the weekend in Albany at Hugh Mills Stadium.

Senior, Keishon Franklin, finished as the state runner-up in the 400 meter run with a time of 49.08, falling just short of the state title by 0.26 seconds against Monroe Area’s Chase Spann. Franklin qualified for the finals with a school best time of 48.89 on Friday.

Franklin also competed in the High Jump event at the state track meet on Thursday, finishing eighth in the state after a jump of six feet. Franklin won region and sectional titles in the 400 earlier this season, and finished as the region champion and sectional runner-up in the high jump last month.

Sophomore, Thomas Rischar competed in the state finals in the 3200-meter run. He finished in twelfth place with a time of 11 minutes, 1.68 seconds. Rischar qualified for state by finishing in sixth in the 3200 Meter run in the sectional meet earlier this season. 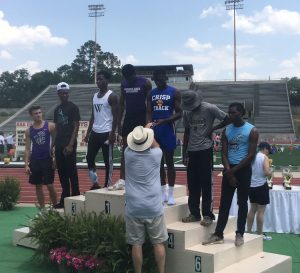 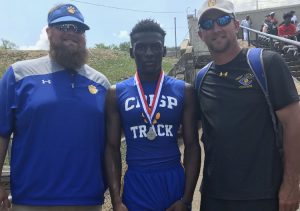