Crisp County running back, Marquez Palmer follows a wall of blockers for his first of two touchdowns vs Americus-Sumter.

CORDELE- The Crisp County Cougars renewed their “Battle of the Flint” rivalry with the Americus-Sumter Panthers on Friday night in ‘The Den.’ The teams contested a hard-fought battle on the night, and the Cougars were eventually able to come out on top in double overtime.

The Cougars kicked off to Americus to start the game off but the Panthers fumbled the possession away on the play and Jayren Fox was there to recover the ball to give Crisp County possession in good field position.

The Cougar offense was not able to get much going on their first possession of the night, however, so they were forced to punt the ball away. Bailey Barfield’s kick was downed at the Americus 12-yard line, so the Panthers were forced to drive the distance of the field.

Five plays later the Panthers opened the scoring on a touchdown pass from about 11 yards out. The extra point gave Americus a 7-0 lead about four minutes into the contest.

Tubby Spivey returned the ensuing kickoff out near midfield to give Crisp County great field position, but the Americus defense held the Cougars to a three and out.

A big punt return subsequently set Americus up inside the Cougar 30-yard line, but a couple of penalties and a sack by Crisp defensive lineman, Jaquan Bass forced the Panthers into a punting situation.

Crisp County went to work from their own 24-yard line after the punt. Quarterback AJ Lofton started the drive off with an 11-yard run, before completing a couple of short passes on the next two plays. A throw from Lofton to Spivey and two more big runs by Lofton got the Cougars to a first and goal situation. Crisp then gave the ball to Marquise Palmer and the freshman running back followed his blocks into the endzone for the first Cougar touchdown of the game. Connor Richmond’s extra point was knocked through and tied the score at 7-7 with about 30 seconds to go in the first quarter.

The Panthers came out with some aggressive play calling shortly after as they were looking to answer the Crisp County score, but Fox intercepted a pass three plays into the second quarter to quickly give the Cougars another scoring opportunity.

Lofton ran for 19 yards on the second play of the following drive to set up Crisp with another first and goal, and Palmer found the end zone once again from four yards out on the very next play. Richmond put the ensuing point after through the uprights to put the Cougars ahead 14-7 with 10:26  to play in the second quarter.

The teams ended up trading punts for the remainder of the first half. The Cougars had a touchdown pass from Lofton to Harold Bell called back due to a holding penalty late in the half, but that was as close as either team came to adding to their point total. The Cougars led 14-7 at halftime.

The teams traded a couple of punts to start the third quarter off. The Cougars then turned the ball over to the Panthers on their second drive of the half  after a high snap went over Lofton’s head. Americus recovered the ball at the Crisp 17-yard line and quickly took advantage of the short field. The Panthers capped off a five play drive with a touchdown on a quarterback sneak to tie the score at 14-14 halfway through the third quarter.

The Cougars were forced to punt the ball away on the following drive and Americus threatened to take the lead on their ensuing drive late in the third quarter.

The Panthers had a first down at the Cougar 30-yard line shortly after but Ahdarrious Gee and Preston Levant came up with a couple of crucial tackles to force the Panthers into a fourth down situation from the Crisp 26-yard line. The fourth down play took place on the first play of the fourth quarter, and Damion Cross broke up an Americus pass attempt to give the Cougars the ball back.

Crisp County subsequently put together a nine-play drive that got them all the way to the Americus 37, but they had to punt after a couple of tackles in the backfiled by the Panther defense. Barfield’s punt sailed inside the Americus five-yard line and was downed at the three after a great effort from Calvin Haugabrook and Jaylin Epps prevented a touchback.

Americus took over at their own three-yard line with 8:01 left in the fourth quarter and they used a long drive to eat up most of the clock looking for the winning score. The Panthers ended up getting down to the Crisp 39-yard line on the long drive, but the Cougar defense was able to force a punt led by efforts from Gee, Chris Paul, Kamron Moate and Camion Snead.

The Cougars took over possession after the Americus punt, but were unable to get anything going so they ran the clock out for overtime.

Americus started the overtime period with the ball, but the Cougars took it away on the very first play on an interception by Cross. The Panthers forced Crisp into a long field goal attempt on the ensuing drive, and Richmond’s kick from around 45-yards out fell a couple of yards short so the game went into a second overtime period.

The Cougars were again held to a filed goal attempt on the following drive, but Richmond’s attempt from just inside 30 yards was successful, and the Cougars led 17-14 knowing that all they needed was a defensive stop on the final Americus possession.

After gaining eight yards over the next three plays, Americus decided to try to send the game into a third overtime with a field goal, but the attempt sailed wide and the Cougars came away with the 17-14 win in an exciting contest.

The Cougars will be on the road next Friday as they travel to play West Laurens. 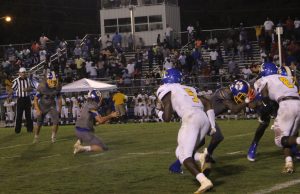