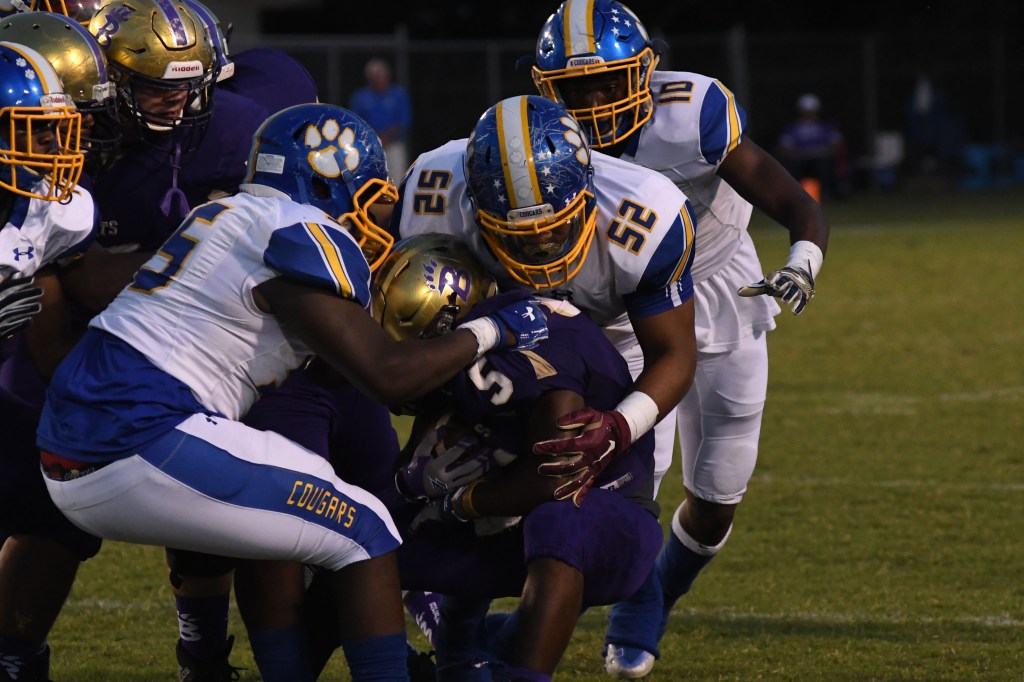 Cougar defensive linemen, Kamron Moate and Jaquan Bass bring down a Bainbridge running back as Ahdarrious Gee (10) closes in on the play. Photo by Powell Cobb/Bainbridge Post-Searchlight

BAINBRIDGE — First of all, Bearcats are funny looking little fuzzy creatures from Southeast Asia. Cougars on the other hand are ferocious big cats in North America. More to the point, the Crisp County Cougars are starting to peak at just the right time.

The young Cougars traveled south to Bainbridge on Friday night to take on an old rival in the Bearcats of Bainbridge. The AAA Cougars handed the 5-A Bearcats a 23-0 drubbing in their own backyard.

From the start of the game the Cougar defense swarmed and pestered the Bearcats like a dog in a flea farm. Early on the Cougars forced a fumble that would lead to a Bearcat safety and a two-point Crisp County lead in the first quarter.

Cougar receiver Tubby Spivey hauled in a 55-yard touchdown pass from AJ Lofton shortly after and the Cougars cruised into halftime with a 9-0 lead.

Crisp County never let up now that they had Marquise Palmer back from injury, and they kept pounding away as “Pacman” Palmer ate up yards to the tune of 111 yards on 14 carries and one touchdown. It seemed that every time the Bear-kittens got going on offense the Cougars would force another turnover, as they did when Sirad Bryant intercepted two passes over the course of the game.

With a 9-0 lead and the ability to shut down the Bainbridge offense at will, Crisp County headed into the fourth quarter, and from there they would put a stake in the heart of the Bearcats.

With the Bearcats trying to get something going in the fourth quarter, they began to pass at an alarming rate. One of those wayward passes found its way into the sure hands of none other than Tubby Spivey, who promptly turned the interception into a pick six touchdown for the Cougars. This score put the Cougar lead up to 16-0.

Only a few minutes later, Spivey yet again intercepted a Bearcat pass and set up a Palmer touchdown. With the score now 23-0 late in the fourth quarter, all that was left for Crisp was to hold on and run out the clock.

“The defense is continuing to get better and over the last few games they have created 13 turnovers. This and the return of some key injuries has given the offense a spark and we are beginning to click,” said Head Coach Brad Harber.

The Cougars had a number of standouts on defense with the likes of Ahdarrious “the Bounty Hunter” Gee, Kamron Moate, Jaryren Fox and Lofton, all collecting about 7 or 8 tackles.

This jelling of the team is coming at the right time. The victory over Bainbridge is sweet, but the Thomasville Bulldogs will be visiting Cordele this Friday.

“We are going to enjoy this road win but we have got to get to work because this Thomasville team coming Friday is really good” Harber further lamented.

The Bulldogs will be bringing with them tradition and a very fine ball club. It is also worth noting that Crisp County’s only win over Thomasville came in 1990 by a 14-12 margin. The win Friday over Bainbridge moved the Cougars’ report card to 3-3 on the season.

See you at the Den Friday! 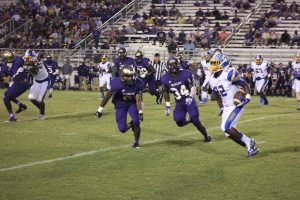 CCHS running back Marquise Palmer (22) looks for running room as two Bainbridge defenders close in. Palmer finished the game with 14 rushes for 111 yards and one touchdown. 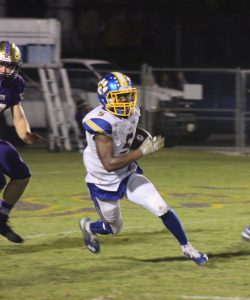 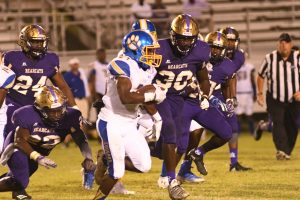 Jaylin Epps in possession of the ball for the Cougars. 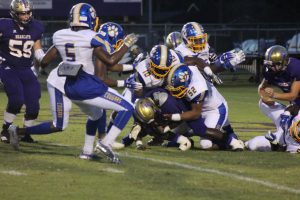 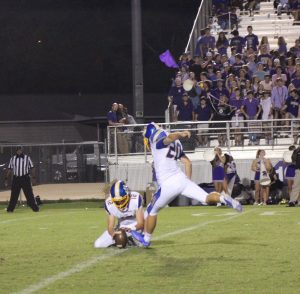 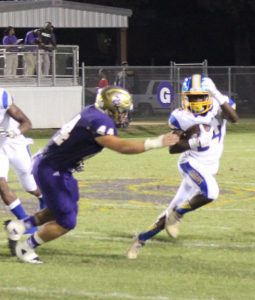 Jaylin Epps makes a move to get away from a potential Bainbridge tackler. 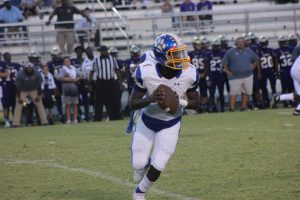 CCHS quarterback, AJ Lofton, rolls out looking for an open receiver against Bainbridge. 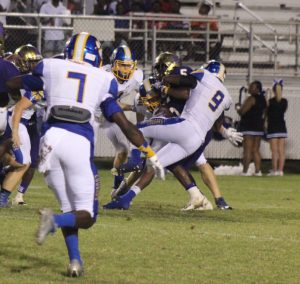 Trenton Richey and Preston Lavant (9) combine for a tackle as Romel Shiloh (7) trails the play.