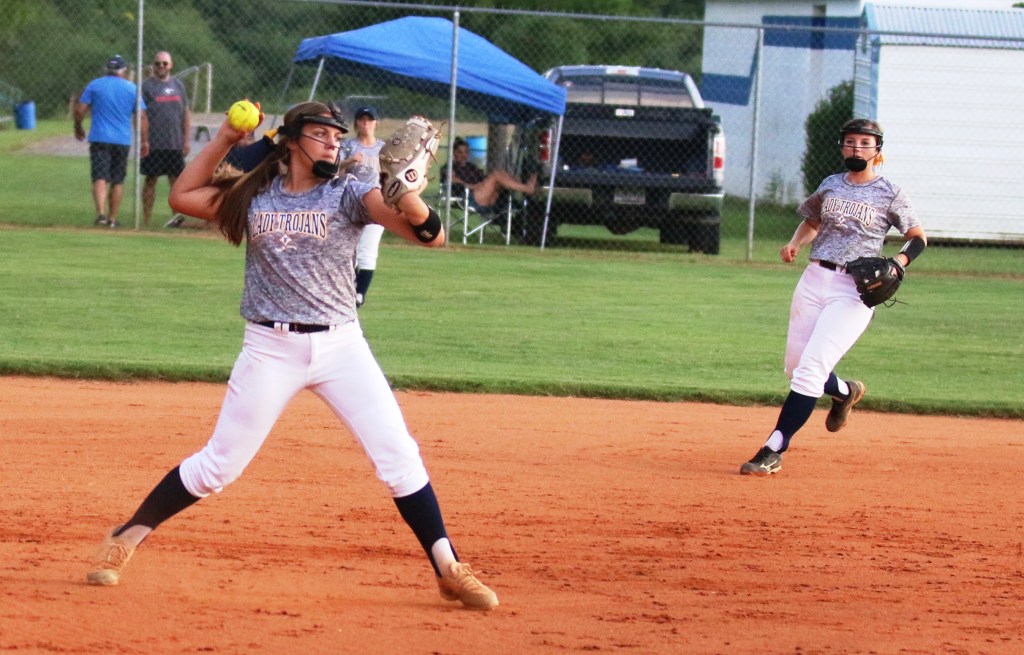 Ella McGalliard prepares to throw to first for an out as Marley Jones looks on during Fullington softball action from earlier this month. (Photo by Bonnie Hauesler)

PINEHURST — The Fullington Academy softball team picked up another win on Monday afternoon when they hosted Windsor Academy. Windsor took the first lead of the game in the top of third inning, but the Lady Trojans used a seven run bottom half of the third to take the lead and ultimately won by a final score of 7-3.

Mackenzie Rogers got the Lady Trojans started with a leadoff single in the seven run frame and Marley Jones followed with a base hit of her own. An error by Windsor allowed Rogers to score and Sarah Kate Wall came up next with a hit that was good enough to score Jones for a 2-1 Fullington lead.

Ella McGalliard followed up with a double to give the Lady Trojans runners at second and third still with no one out, and Parker Wall picked up an RBI single in the next at bat that scored McGalliard and courtesy runner Camille Tyndal. Carlee Roberts kept the line moving with an RBI hit in the next at bat for a 5-1 lead.

Maddy McLeod subsequently reached base on a bunt single before Windsor was finally able to get the first two outs of the frame. Rogers then came back up to bat and reached base on a Windsor error that allowed Roberts to score for the sixth Fullington run. Jones next pushed across the seventh and final run of the bottom of the third for the Lady Trojans with her second hit of the inning. McLeod scored the run on the hit from Jones to put Fullington ahead 7-1.

Windsor pulled two runs closer in the top of the fifth inning using a pair of two out hits and a Fullington error, but the Lady Trojans finished the game off for a win by the 7-3 score line.

Jones, McGalliard, Sarah Kate Wall, and Parker Wall all finished with two hits in the game to lead the Fullington batting order.

Sarah Kate Wall pitched the first four innings in the game for the Lady Trojans, allowing only one run on two hits and two walks. McGalliard finished the last three innings in the circle, conceding two unearned runs on five hits and a walk.

The Lady Trojans picked up an 11-1 road region victory at Citizens Christian Academy tonight, and they are scheduled to finish out a three game week with a home game on Thursday afternoon against Tiftarea at 4:30 p.m.