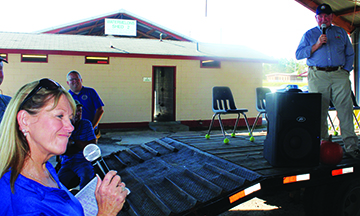 Lisa McKinley, a crop insurance agent from Pitts, reacts with apparent skepticism to U.S. Agriculture Secretary Sonny Perdue’s response to her concerns about both crop insurance and federal disaster assistance for farmers, who face massive losses due to Hurricane Michael.

Now that residents have had a chance to come up for air in the aftermath of Hurricane Michael, it is becoming clear that agriculture will be the economic sector that suffers most from the storm’s damage.

Sec. Perdue, a former two-term governor of Georgia, told those gathered at the market, “I don’t want to make false promises or get anyone’s hopes up. We are just now learning the extent of the damages and we want to hear your concerns.”

Black had earlier told the crowd, “We do not have all the answers today.”

Expectations for area row crops and specialty commodities like pecans were good just 10 days ago. Many growers were looking at bumper crops for this year.

Now losses for some producers could reach as high as 85 percent..

This is a developing story. Check cordeledispatch.com later or see Wednesday’s print issue for more news on Sec. Sonny Perdue’s visit to Cordele.