Cougars use big second half to defeat Worth 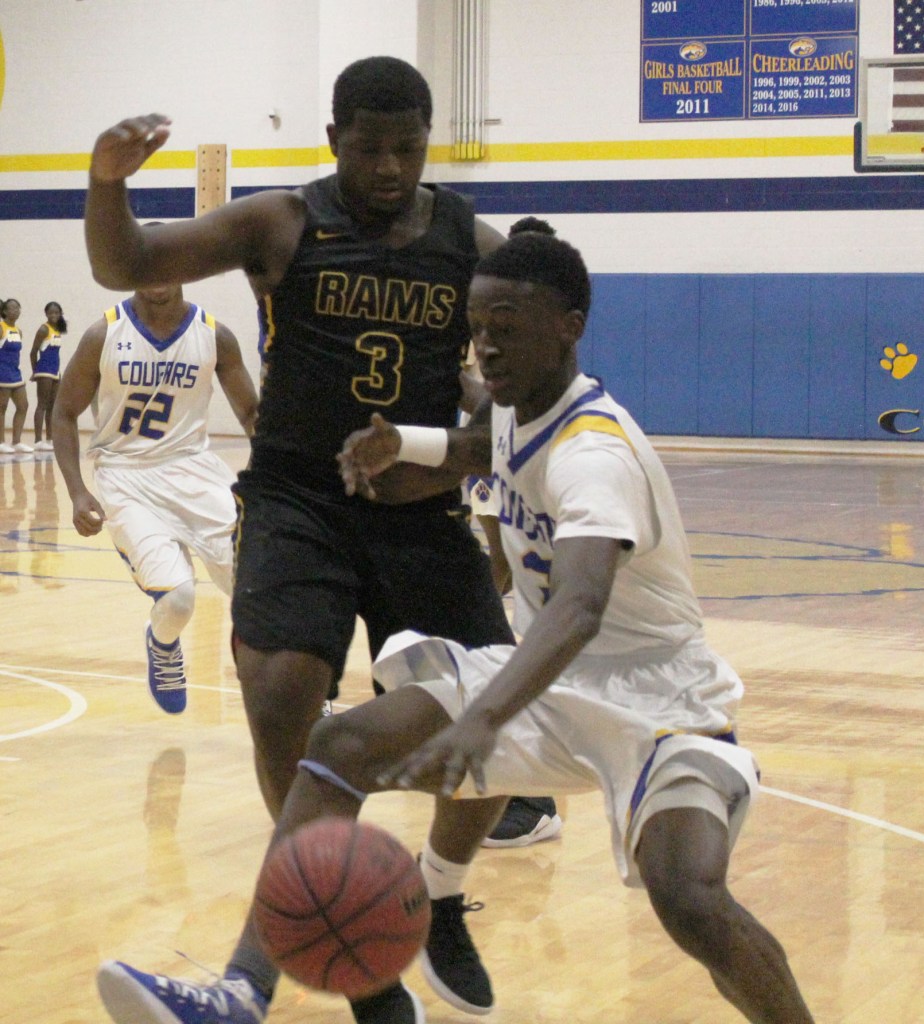 Crisp County's Malik Hall holds off a Worth County defender while in possession of the basketball during Tuesday night's game. The Cougars won the game over their region rivals by a final score of 55-39.

CORDELE— The Crisp County High School boys’ basketball team brought their region record to 3-1 so far on the season with a 55-39 win over the Worth County Rams in Cordele on Tuesday night.

A low scoring defensive first half of play saw the Cougars take a two-point lead into halftime before pulling away in the second half.

The Cougars got four points from Tubby Spivey and one basket apiece from Ty McKenzie and Malik Hall for an 8-5 lead over the Rams at the end of the first quarter.

The strong defensive effort continued from both teams in the second period, as Worth outscored the Cougars 8-7 over the course of the quarter. Crisp County’s seven points in the second quarter were scored on a three-pointer from KJ Williams, a two-point shot from PJ Coleman and a layup by McKenzie. The Cougars had a 15-13 lead at halftime.

Both teams got the offense going a bit more in the second half, as Crisp outscored Worth 16-11 in the third quarter. Nathan Willis, Willie Poole, and Coleman each hit a three-pointer for nine of the 16 Crisp County points in the period. Hall scored five points in the quarter on two driving layups plus a free throw and Willis knocked down a mid-range jumper earlier in the quarter to account for the other Cougar third period points. Crisp was ahead 31-24 entering the fourth quarter.

Worth County got back within six points of Crisp’s lead after an early three-pointer in the fourth period, but the Cougars kept the offense going and outscored the Rams 24-15 during the final quarter to secure the region victory. Spivey took over for the Cougars in the period with 13 of the 24 Crisp County points on five two-point baskets and three free throws. Williams tacked on five points in the period, while McKenzie, Coleman and Willis each got on the score sheet with a bucket as well, leaving Crisp on top at the end of the contest by the final score of 55-39.

On defense the Cougars combined for eight blocked shots and seven steals, which helped them hold Worth to just the 39 points in the contest. Spivey led the Cougars in scoring on the night with a season high 17 points to go along with six rebounds, two assists, one steal and one block.

The win put the Cougars at 6-11 overall on the season, with the 3-1 record in region play. Crisp was in second place in the region standings behind Monroe at the conclusion of Tuesday night’s games.

The Lady Cougars were defeated earlier in the night by the Worth County Lady Rams by a final score of 73-36.

Aaliyah Hardemon was the leading scorer for the Lady Cougars in the game with 10 points, and she also posted four rebounds, one assist and three steals on the stat sheet.