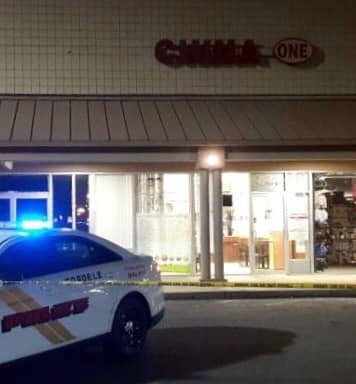 Cordele Police Department officers responded to an armed robbery at China One restaurant located at 1217 East 16th Ave. on Tuesday shortly after 10 p.m.

Detectives with the Cordele Police Department continue to investigate Tuesday night’s armed robbery at the China One restaurant on 16th Ave., where a man entered the business shortly after 10 p.m., brandished a pistol, and demanded money.

The suspect is still at large. According to a press release from the Cordele Police Department, the suspect is believed to be a black male, approximately 17 to 22 years old, approximately 5’10” in height, and of a slender build. The suspect was wearing dark clothing and an orange stocking cap covering most of his face.

The man made off with an undisclosed amount of money from the restaurant.

Due to the warm weather, CPD investigators are hoping someone noticed the suspect possibly wearing the orange stocking cap elsewhere and will call with that information.

“We are glad no one was injured as a result of this crime,” CPD Chief Lewis Green stated in the release. “We ask that if you saw anything suspicious in and around China One, Walmart, or Tractor Supply last night around 10 p.m. to call and give my detectives that information. That information may be the tip we need to solve this case.”

Anyone with information regarding this crime is asked to call the Cordele Police Department at 229-273-2921.