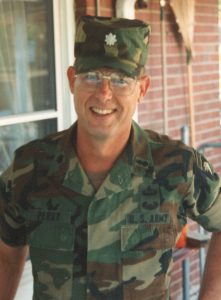 John Harris Perry, Jr. of Cordele died at his home Friday, June14, 2019 after a lengthy illness of Progessive Supranuclear Palsy (PSP). John was born in Fitzgerald and was the son of Lina Gibbs Perry of the Lake Blackshear area and the late John Harris Perry, Sr. both formerly of Rebecca and Turner County. John lived his early life in Valdosta and Rebecca and attended Rebecca Elementary School and was a 1966 graduate of Turner County High School in Ashburn and earned the degree Bachelor of Mechanical Engineering from Georgia Tech in 1971. He was a career Army Officer and served tours of duty in Korea, Germany, Saudi Arabia, Iraq and the Southern United States. He attended Airborne School at Fort Benning in 1970 and earned his jump wings while an ROTC cadet at Georgia Tech. His first duty assignment, of which he was immensely proud, was with the 82nd Airborne Division at Fort Bragg, NC where he earned his Senior Parachutist rating and was an Air Defense Artillery small unit leader. During his Army career, he was selected to obtain an advanced degree and in 1980 earned his Master of Science degree in Aerospace Engineering from Georgia Tech. He was immediately posted to White Sands Missile Range, New Mexico, where in the neighboring town of El Paso he met and married his wife, Chris. Additional accomplishments of his Army career included command of a Maintenance company as a Captain at Fort Benning and as a Lieutenant Colonel, command of the 801st Maintenance Battalion in the 101st Airborne Division at Fort Campbell, KY including deployment with the Battalion/Division to Saudi Arabia and Iraq during Desert Shield/Desert Storm in 1990 – 91. John retired from active duty in 1995 after 24 years of service. Following retirement from the Army, he continued to serve in the defense industry in the Northern Virginia area with the BDM International Corportaton, which merged in 1998 with TRW Corporation. In 2000, he and his wife, Chris moved to Crisp County and built a home at Lake Blackshear. In 2002 John returned to the defense industry as a senior logistics analyst with various contractors, supporting the US Marine Corps Systems Command in radar system and tactical communications provisioning at the Marine Corps Logistics Base in Albany.  Funeral services will be held at 12:00 p.m. Monday, June 17, 2019 in the chapel of Rainey Family Funeral Services with the burial following in Andersonville National Cemetery. The family will receive friends prior to the service beginning at 11:00 a.m. at the funeral home. John is survived by his wife of 36 years, Christine Ruth Jacobson Perry of Cordele; two daughters, Jennifer Perry and her husband, Scott Jenkins of Reseda, CA and Michelle Gravitt and her husband, Rusty Gravitt of Ashburn, a son, Jason Wade Bartlett of Chantilly, VA; two brothers and their wives, Earl  and Marilyn Perry of Ashburn and Michael and Lori Perry of Mariette; and three grandchildren, Griffin and Garret Gravitt of Ashburn and Jason Bartlett, Jr. of Leesburg, VA. He was preceded in death by a brother Glenn Perry. The family requests that memorials be made to Cordele First United Methodist Church, 302 East 12th Avenue, Cordele, GA 31015. The family may be contacted at the family residence at 238 Cannon Road, Cordele, GA 31015. Arrangements are by Rainey Family Funeral Services. An online guest register is available at www.raineyfuneral.com