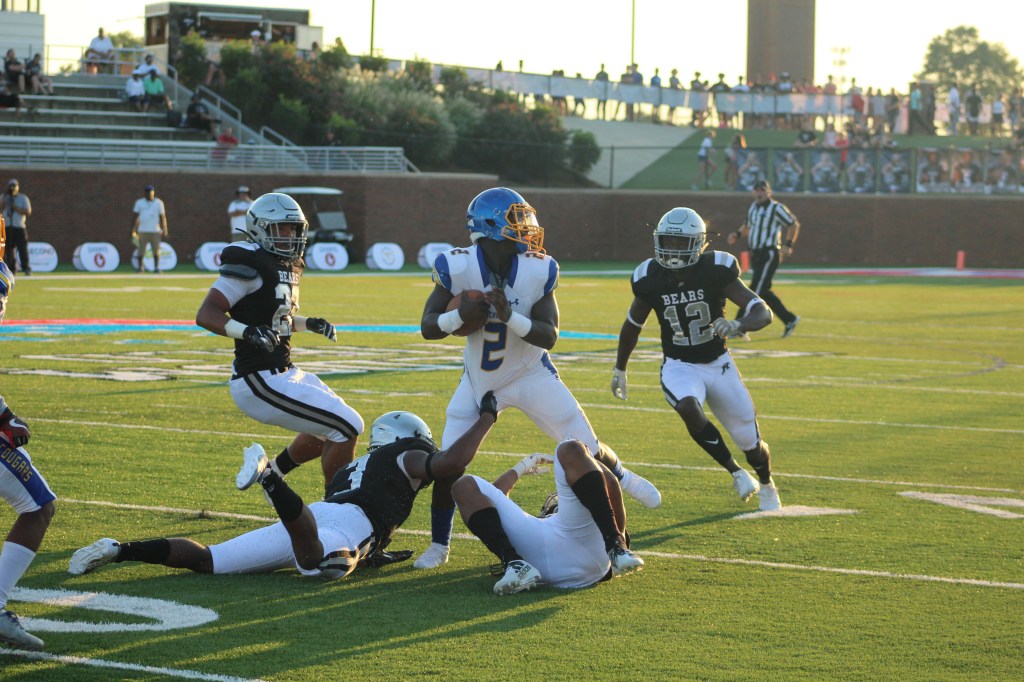 Crisp County High School running back Marquise Palmer (2) spins out of a tackle surrounded by several members of the Houston County defense during Friday night’s scrimmage game at Freedom Field in Warner Robins.

WARNER ROBINS— The Crisp County High School Cougar football team closed out preseason preparations for the 2019 season with a 26-0 defeat on the road at Houston County on Friday night.

The Houston County Bears started out the game with the ball, but the Cougar defense came up with a quick stop to force a punt led by tackles from Chris Paul, Damion Cross, Tariq Hartage, and Jh’quan Bass.

The Cougar offense received the ball backed up inside their own 20-yard line following the punt, and just three plays into their first drive, a high snap sailed out of the back of the end zone for a Houston County safety. The defensive score put the Bears up 2-0 with just under eight minutes to play in the first quarter, and the hosts never looked back from there.

Over the remainder of the first quarter, both teams continued the strong defense. Paul, Preston Lavant, and Sirad Bryant each made some key stops for the Cougars during that stretch, while Marquise Palmer and AJ Lofton provided most of the Cougar offense in the first period.

The Bears took the 2-0 lead into the second quarter, and they added to that advantage shortly after with a 15-yard touchdown pass at the 10:50 mark of the second period.

The two teams traded a few more defensive stops over the next several drives, and a couple of big Crisp County offensive plays set the Cougars up with a chance to score just before halftime.

The Cougars started the final drive of the first half at their own 20-yard line with 4:40 to play in the second period, and three plays into the possession CCHS sophomore quarterback Jack Carter ran for 27 yards on third down with nine yards to go for what ended up being one of the biggest Cougar plays of the night.

Palmer picked up nearly 15 yards on a run on the very next play to get the Cougars out past midfield, but a high snap on the subsequent play ended up losing Crisp nearly 30 yards.

The Cougars made up all of that ground and more on the next play when Lofton threw a long pass over the middle that Palmer hauled in for close to a 40-yard pickup.

Palmer and Lofton each ran the ball a few more times on the drive, and Crisp eventually attempted a field goal from about 30 yards out, but Connor Richmond’s attempt went just wide of the right upright.

Houston took a 9-0 lead into the halftime break following the missed field goal.

The Bears intercepted a deflected pass attempt by the Cougar offense early on in the second half to give the Houston offense a short field.

A Cougar fumble on the subsequent possession led to the hosts tacking on a field goal late in third quarter for a 19-0 lead, which was where the score stood at the conclusion of three quarters of play.

The backups and younger players for both teams took the field during the fourth quarter, and Houston County tacked on another touchdown during the last period, which left the final score on the night at 26-0 in favor of the hosts.

The Cougars can now put the preseason behind them, as they will play their first game of the regular season this coming Friday night on the road against longtime rivals the Americus-Sumter Panthers. Kickoff from Americus is set for 7:30 p.m. on Friday night.