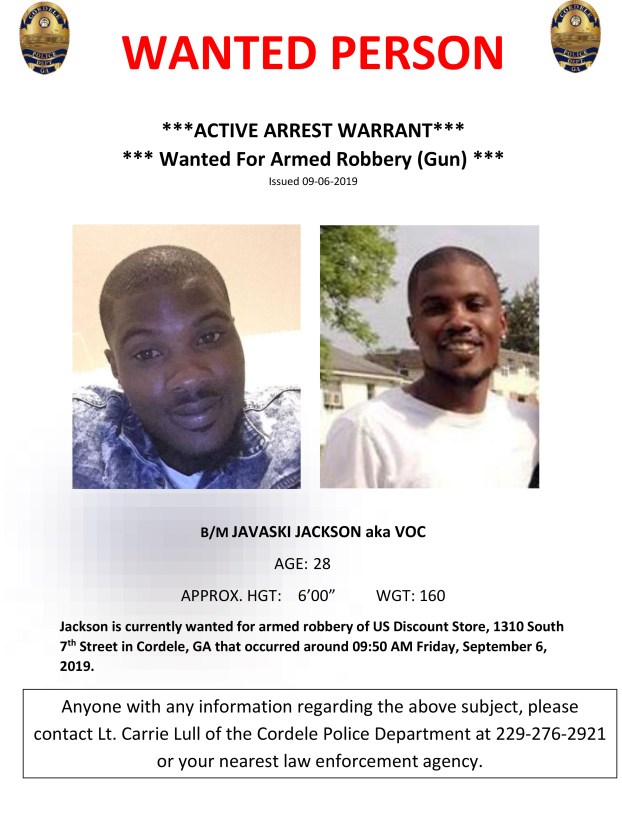 According to CPD, Jackson brandished a pistol and ordered employees at the US Discount Store to give him money. The suspect was described as wearing a black hooded jacket, light colored pants and white shoes.

CPD says Jackson is still on the run and should be considered armed and dangerous. Do not approach if you see him; call 911 and inform them of your location and clothing description of the suspect. An arrest warrant for Jackson was issued over the weekend.

Cordele Police Chief Lewis Green said, “This subject is wanted for a serious crime and I ask that anyone with information on his whereabouts contact your local law enforcement so we can get this dangerous criminal off of the streets. I would like to thank the Crisp County Sheriff’s Office and Dooly County Sheriff’s Office for collaborating and assisting us in this investigation.”

CPD, CCSO, and DCSO swung into action as soon as the 911 call reporting the crime was received.  They were unsuccessful in apprehending the robber, but it was not for a lack of effort. Virtually all Cordele Police Department units on duty were involved in the search, and the Crisp County Sheriff’s Office provided manpower in the hunt for the robber. That included Sheriff Billy Hancock and the sheriff’s office’s tracking K-9.

Dooly County Sheriff Craig Peavy also assisted in the manhunt and put his office’s tracking K-9 team to work on the case as well.

An unused convenience store that sits on the corner of 8th Ave. E. and 2nd St. N. was struck be... read more