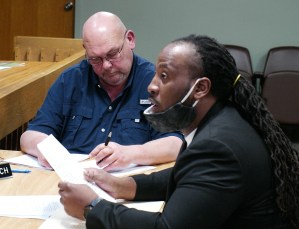 As calls across the nation increase for the elimination of symbols of the Confederacy, the Cordele City Commission heard a call to topple the statue of a Confederate soldier at the Community Clubhouse.

Cordele resident Joshua Deriso, who had requested time to talk about opened his remarks to the commission by recalling an episode from a Spiderman movie where superhero Peter Parker, refuses to come to the aid of a surly store clerk who is being robbed only to learn that the same criminal killed his friend.

“ I refer to this because the five of you, our elected leaders, have the same powers as Peter Parker,” Deriso said. “You have a wide web to change our community.

“Over the past few weeks, the national events of the shooting, killing and murder of unarmed black people has forced prolonged protests in the streets of this nation. It has also given way to overdue critical conversation. Many local citizens have reached out to me and I hope I can be a voice for them and make them proud. My words may be uncomfortable for some of you.

“We as citizens question the responsiveness of this body. Cordele was reported to be the poorest town in Georgia with 5,000 or more citizens.  Instead of this body taking that report with legitimacy, there was a town hall held but no ownership or responsibility was taken or any major changes seen.”

Deriso then pointed out that Chairman John Wiggins ran for office on a “get aboard the progress train” platform that called for the demolition of blight spots and abandoned homes, yet there has been no effort to initiate changes.

“We want action especially on the west side,” he said. “The homes on the east side sit ready to sell, while the west side homes are for rent and offer higher utilities. There is no effort from the city to work with the banks or the city to provide a pathway to home ownership for African-Americans, which is the lowest in the state.”

Deriso then called for the removal of the Confederate monument on the grounds of the Community Clubhouse.

Wiggins thanked Deriso for his “enlightening statements,” and moved on to the commission business, which included the progress of various projects, particularly the completion of the sidewalks on 10th St. and Pecan Avenue, the progress of the Gillespie-Selden Rehab project, the Quiet Community Project and several DOT projects.