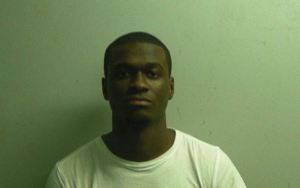 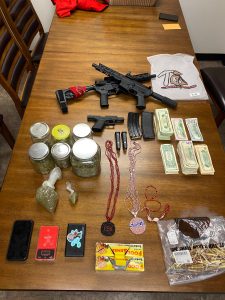 CRISP COUNTY- November 3, 2021
On Monday, November 1, 2021, around 1:30 P.M., Crisp County Sheriff’s Deputies arrested Traevon Blackshear, a 23-year-old male from Cordele, Georgia. Blackshear is charged with discharge of firearms on or
near public highway or street, aggravated assault, reckless conduct, possession of a firearm during the commission of a crime, and possession of marijuana with intent to distribute.
At approximately 11:30 A.M., a Crisp County Sheriff’s Deputy was stopped in their patrol vehicle at the traffic light on 24th Avenue and Joe Wright Drive and heard shots fired nearby. There were no reports of injury during this incident. Through further investigation, deputies were able to identify the suspect vehicle and tag number.
A Deputy spotted the suspect car parked at a house in the 500 block of West 17th Avenue. Sheriff Billy Hancock and Cordele Police Department Chief Mike Hathaway responded with Crisp County Sheriff’s
Deputies. Traevon Blackshear was escorted out of the house and placed under arrest without incident. The house and car search revealed jars and bags of suspected marijuana, cash, ammunition, and three guns.