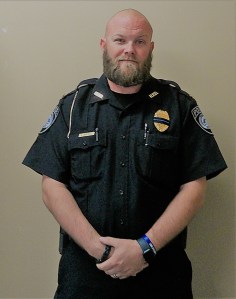 Chief Barfield has hit the ground running working long hours and working to make Rochelle Police Department the best it can be.  Chief Barfield has eleven years law enforcement experience he was working part-time with Rochelle when he accepted the position of Chief, he has also worked for Sycamore PD, Wilcox Sheriff’s Department, he was employed full-time with Sears as a service technician also.

Chief Barfield stated that he is implementing more community-oriented policing techniques, he stated the citizens have lost the trust in the department and he wanted to regain it. He stated that beginning in January his officers would be required to make at least eight contacts with the public that are not responding to service call contacts, he wants his officers to get to know the citizens on a personal level and regain their trust.  He wants citizens to know they can trust the police and that it takes the community members and the police to work together to reduce crime and make out neighborhoods safer.

He stated he knows that change will not come overnight but he looks forward to the challenges ahead.  Chief Barfield stated that if any citizens have any cares or concerns about the police department please contact him and discuss them with him.