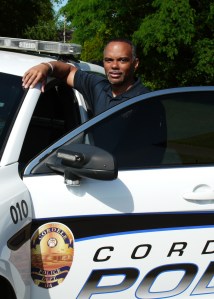 “I’m really excited,” he said. “For a long time, it has been my goal to be police chief of a city.”

After serving eight years in the U.S. Army, Heard began his law enforcement career in 2008 in the uniform patrol division of the Perry Police Department. Four years later, he was promoted to field training officer and in 2014 was promoted to Uniform Patrol Sergeant.

In 2016, Heard joined the Office of Professional Standards of the Georgia Department of Corrections as a special agent and graduated from the Georgia Bureau of Investigation’s GDC basic agent class that same year.

“Our most critical concern is manpower — retaining older officers and recruiting new ones — and that will be my primary duty,” he said.

Ideally, there would be six officers per squad and there are four squads so there is a total of 24 officers when fully-staffed. Currently there are eight officers in the entire force.

“We will also be looking at our use of force policies, our vehicle chase policies, just to make sure they are up-to-date.”

Heard’ is a very vocal proponent of community policing.

“I feel like a police department can only do so much without community support,” he said. “When you have good community-police relations, it’s almost like a well-oiled machine. Cordele doesn’t need any kind of repressive force. Cordele just needs the dialogue or the bridges of communication to be opened between the police department and the community.

“Younger officers generally like to work traffic and be very proactive and there is a time and place for that,” he said. “You have to look at traffic enforcement as ‘we’re trying to make everybody safe on the road’ and if someone is speeding or driving drunk, then traffic enforcement enforces the traffic laws that make people safer.’”

Still, Heard feels you get more bang for the buck by establishing community ties.

“In a small community like Cordele, it’s the public contacts that are going to be most important,” he said. “If you make those contacts until they know you on a name basis, you will be able to do your job more effectively and the community and the department benefit from that.”