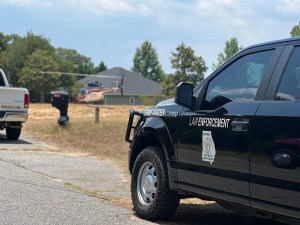 On June 24, 2022, at approximately 12:00 P.M. Crisp County Communications E-911 dispatched first responders to Lake Blackshear after receiving reports that two jet ski’s collided and two individuals were in the water. Thankfully, individuals on a boat nearby contacted authorities and assisted in rescue efforts. Air Evac Lifeteam 86 transported one male to a medical facility. The male was in stable condition upon departure. A female was checked out on the scene by Crisp County EMS.

“This incident could have quickly turned into a tragedy. However, thanks to a quick response from all involved, both individuals were rescued. I am grateful for our partnership between state and local agencies. I am also grateful for the community we have here in Crisp County. Thank you to the citizens that assisted today and those that allowed us to commandeer their docks and property,” stated Sheriff Billy Hancock.