Cougars visit Packers Why?
Many out there have asked why we are playing Colquit County and Lee County. The answer is those are games that were scheduled last year for the purpose of bringing in revenue to the program. That’s it that’s the answer, sorry it wasn’t more helpful.
This time around Crisp County visited the number 1 ranked team in 6A ball in the state and highly ranked nationally. Cougars came up on the short end 37-7 in a game that lasted over  four hours due to lightning delays. The weather plagued all of south Georgia Friday night causing weather delays all over.
All in all playing against one of the five best teams in the entire country, the Cougars didn’t play badly they just had to play someone that is really good. Two weather delays before halftime is also enough to get anyone off their game and playing up two classifications two weeks in a row on the road is anothe. The Cougars will be coming home this weekend  to face a very good Worth County team.
”The boys started out a little intimidated but soon figured out that these kids put on their pants one leg at a time also. Then they started playing hard and competing,” said Cougar Head Coach Shelton Felton.
The game ended at the end of 3 quarters because of a GHSA rule that doesn’t allow non-region games to go past 11:30 p.m. 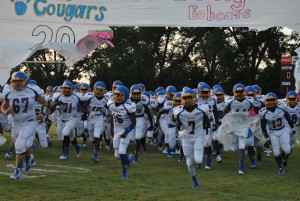