BY JOE JOE WRIGHT/joejoe.wright@cordeledispatch.com
“ I’m not happy with the loss but we competed well gaining 12 first downs and finding some offense,” said Head Coach Mark Ledford. “ We had 5 turnovers and your not going to win games against good teams when you turn it over.” The Patriots fumbled the ball at the five yard line and Hawkinsville didnt turn it over other than that it would have been a tight game. The final score was 16-0 in favor of homestanding Hawkinsville but the Patriots get another week to rest some banged up players and come home against Calhoun County Friday night. Leading the offense was Ta’Corian Hunlen and Robert Miller. The Patriot defense was led by Larry Pierce and Darian Hunlen. 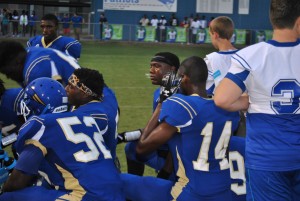