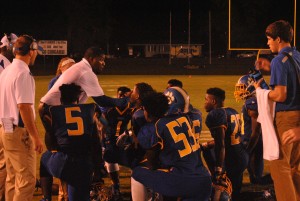 On a night that was wrought with anticipation, the Cougars couldn’t get much going against one of the best teams in the state. Crisp County has opened up against 3 of the dominating teams in the state and two of those teams were on the road.
To start the game off the Cougars forced a fumble by the Rams in their territory and it looked like the inaugural first home game of Shelton Felton might be a contest. The Rams held the Cougars and took the ball and commenced giving an education in the fundamentals of blocking, running, throwing, catching and tackling which are the things one must due to win a ball game. The Rams did this all night and the Cougars did not. This is not to say that Crisp County is bad it’s meant to mean that the Rams are good real good. You can’t make mistakes and miss assignments and beat teams of that caliber ever period.
Crisp County didn’t catch any breaks all night and the Rams scored about as much on defense as they did on offense. An interception in the end zone resulted in a 104 yard return for touchdown. The football gods were not looking favorably upon the Cougar on Friday night. However that night is over and it is time to put it behind you pick your self up and dust your self off and get ready for Dougherty County why? Because there ain’t no crying in football and the people of Crisp County believe in you stand up and be men.
Crisp had opportunity’s not many but the 104 yard touchdown was an opportunity. I say again that play is over move on. Coach Felton said,” they are a team like we are trying to get to very good and disciplined.””You just can’t make mistakes and expect to win against that good of a team.”
It is paramount now that the Cougars rise up like the Phoenix from smoldering ashes of a pure scorching they have faced and get prepared for the coming foes. I for one believe they can do it.