Y JOE JOE WRIGHT/joejoe.wright@cordeledispatch.com
Brian Sawyer a  former Crisp County Cougar and Long Snapper for Florida State University returns to Tallahassee along with his father in law as an honorary captains to flip the coin in Florida States  game against South Florida. In an ironical twist Brians father in law Bill Duley was the punter for Florida State in 1974 though 1977 and the center and long snapper on that team was none other than Brians Father Bill Sawyer. Brian now makes his home in Dunnellon,Fla. with his wife Katie and their daughter Kennedy. Brian is employed as the Transmission Manager of C and M Services a division of Duke power. 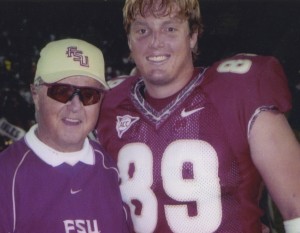 This is a very sore subject with me