On Friday afternoon my son Matt tells me an unbelievable story. Turns out it is believable and true. Matt and his friend Duff Phinney are swimming in the lake pre training if you will to before heading to the military. They finished and looked out into the middle of South Cedar Creek Slew at Lake Blackshear and what did they see a Buck Deer swimming in circles.
Curious they ventured out there in kayaks. As they approached the buck he swam off. Finally after several minutes they corralled him up forcing him to shore. The buck ran up on the bank about 100 yards exhausted turned around ran back and jumped in the water swimming back out to the same point. Duff and Matt again kayak out to the buck who went back to the same spot swimming in circles. They again corral him up and take him back to shore. The buck here in after referred to as “Mark Spitz” jumps back in again and swims to prior location. This exercise happens a total of 3 times and by the final time the buck is completely exhausted. As the two “buck” life guards approach for the 3 rd time the buck goes under drowning. The boys both grab antlers pull him up and Duff climbs into Kayak with Matt and hold Buck up as Matt paddles them to shore. The buck is all but dead and they leave the kayak and swim with him to shore and drag him up on the beach.
Now comes the tricky part for nearly 25 minutes they give the buck CPR and at one time they thought he would make it but alas he expired going to that great woods in the sky. No they didn’t exactly put their lips on his , I’m his dad I had to ask. However they got air into his lungs enough that he gasped for air.
Now comes the tricky part why would a buck commit hairy cairy or suicide if you will. Several plausible explanations come forth. 1. cracked his head went crazy no sign of that though. 2 Rabies’ hard to tell after he drowned 3. Possibly followed a doe into the water and she drowned and that’s why he swam in circles out there in the same spot. Whether he drowned her or a gator got her . This one seems more realistic to me given the information we have.  One eye witness to the event Freddie Gilliam watch from her dock as the events unfolded.” It was one of the craziest things I have ever seen I don’t know what was wrong with that deer, but he bent down our fence when he went to jump over it.” I guess this will remain a deer mystery, was it suicide, was it love, was it disease we may never know. 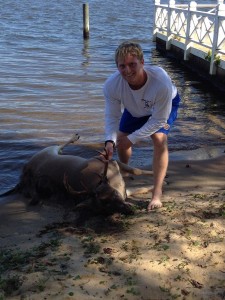 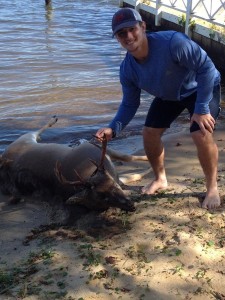