Dooly takes on Pacelli and the Pope

BY JOE JOE WRIGHT
joejoe.wright@cordeledispatch.com
Vienna — St. Anne Pacelli invaded Dooly County High in the “Grove” in Vienna and it appears the Pope was on their side as the Bobcats fell victim 30-8. With Pope Francis visit to the USA it will be interesting to see how many Catholic schools win this weekend.
In the first half of play Pacelli was playing smart and not making mistakes and after a couple series apiece with the ball, the Vikings of Pacelli punched in a touchdown in the 1st quarter to go up 7-0. A Dooly fumble and a long pass put Pacelli back at the goal line in the 2nd quarter and Pacelli again converted. Then with time running out in the first half Pacelli had driven down to the Bobcat 5 yard where with 2 seconds on the clock Pacelli kicked a field goal and went into half-time up 17-0.
In the second half things didn’t get much better for the homestanding Bobcats. Pacelli continued scoring going up 24-0. Then Dooly County jumped on the board with a tote by the quarterback Bo Lawson. The two point conversion was good, it was a pass to little brother Dre Lawson and the score stood at 24-8.
Then late in the 4th quarter Pacelli would strike paydirt one more time and the final stood at 30-8.” Tonight we made to many mistakes against a very good and disciplined team.””We have a lot of work to do in order to compete with the teams left on our schedule, “ said Head Coach Jimmy Hughes. The Bobcats will be idle next weekend and come back to Vienna on October 9th for their Homecoming festivities were they will host a very good Hawkinsville Red Devils team. 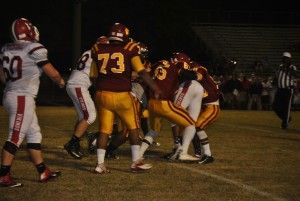