Where are they Now: Laurie Shepard

In 1987 when girls fast pitch softball kicked off in Crisp County an unmatched superstar emerged in it’s inaugural year. Laurie Jean Shepard had been trained since childhood by her father Virgil to play baseball. Then suddenly Crisp County caught up with Title 9 and girls fast pitch was upon us. She was an instant star.
If I could equate her talents to pro football or baseball, Laurie Shepard would have been the Joe Montana or Chipper Jones of softball. She would go on to become the first professional female athlete in Crisp County history. The baby sister of two brothers (who were pretty good themselves ) Bruce and Brian Shepard she really didn’t have a choice she was going to have to play ball and play she did. “Laurie was just as good as any of us she was an all-star in baseball,” said Brian Hyde a former classmate. “If they had not started softball she would have been playing baseball with us on the Cougars, we could have used her,” Hyde said.  Laurie was the 1990 middle Georgia player of the year and also the Most Valuable Player in the GHSA all star game. Laurie graduated in 1991 and accepted a scholarship to play softball at Florida State University. Laurie would go on to lead FSU to their first ever ACC crown plus two more and two trips to the College World Series and she was  all ACC in 1994 and 1995. She would graduate in 1995 as team captain  with a B.S. in Health and Fitness. At the time most females would have been done with ball but not Laurie. The Atlanta Braves Hall of Fame pitcher Phil Neikro started up an all female professional softball team called the Silver Bullets. Laurie would go on to star on that team as well. Ladies Pro softball would not be a lasting thing but playing on that team proves one thing for certain. Laurie Shepard was one of a handful of ladies in the world that was good enough to be called a PRO. I have spent many years in competitive softball and I have seen hundreds of really good softball players but never one as good as she was. After her softball career was over Laurie found solace in the fact that she could also teach it, for she loved the game so much.
For nearly 15 years Laurie trained girls in softball and helped over  500 get scholarships to college. Laurie put on programs sponsored by Adidas and Under Armour. Laurie continued her education and got her Masters in Sports Management. In 2010 and upon the arrival of her twins  Jadyn and Gavin to the family fold Laurie gave up sports training as a business. She is now employed by Gwinnette College teaching PE. Laurie still does some training of girls in softball,  but she wanted as any mother would more time with her kids.
Laurie now resides in Cummings, Ga. and still enjoys softball and her family. “I realize how blessed I have truly been and how so many special people have helped me along my journey.  My athletic days were about me pushing myself to be the best I could be and see how far I could take my career.  I achieved my goals in my athletic career , now my goals and passion have changed.  Everyday I want to be the best parent I can be for Gavin and Jadyn.   Also, I want to be a blessing to others that are striving to meet their athletic and fitness goals like so many people were for me.  Life has come full circle for me and I’m so appreciative of every bit of it.”
In our society men’s atheletics has always been front and center, first and fore most, so often ladies get left out or get a raw deal. Laurie Shepard  has shown us all that when you start talking about athletes you might want to use the old southern adage “ladies first.” 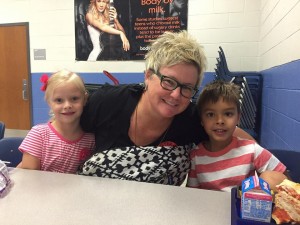