Fullington Takes one on the Chin 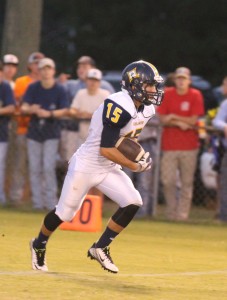 BY JOE JOE WRIGHT
joejoe.wright@cordeledispatch.com
In above action Ty Tyndal looks for running room against Thomas Jefferson. The Trojans came up on the short end of a 78-55 shootout.
I’ve been around sports along time. I’ve seen a lot of games and never heard of a high school football game that had 20 or more touchdowns. Well, with a total of 133 points scored in the game and Fullington coming out on the short side of the scoring, one thing is for certain; the defenses stayed home. Even if the defenses scored they still stayed home. Somebody scored on average every 2 minutes and 45 seconds at least.
In a game pitting last year’s State Champs Fullington against the runner-ups which was Thomas Jefferson the game plan was score and then score some more. Fullington will be home this week celebrating homecoming against Covenant Christian