Where are they Now: Danny Blizzard

Once upon a time way back when; there was a quarterback. Charles Daniel Blizzard Sr. was the Crisp County Rebels /Cougars quarterback during integration. A graduate of Crisp County High in 1972 Danny as everyone called him was a star in football, baseball and basketball even though he finally passed on the last one. Former Crisp County Football Coach Charles Harper said “ he was one of if not the finest players I ever got to coach, not only that he was a really good person.”
Danny won many accolades in football, baseball and basketball including Most Valuable Player Awards in all sports and was on the Macon Telegraph  all Middle Georgia team He was also a member of the State Recreation Department Championship team in 1971. Danny competed for region honors against the greatest Valdosta High team and arguably the greatest high school team period of all time and their  quarterback  Stan Bound . As some of you may remember Valdosta won the High School national title in 1971. That is the same year that the Titans from the movie”Remember the Titans “ came in 2nd, and “ now you know the rest of the story.”After graduating high school in 1972 Danny attended Southern Mississippi in Hattiesburg, Miss. on a baseball and football scholarship. Danny soon discovered after football season that year that the head coach had no intention of him playing baseball just football.
Danny left Southern Mississippi and went to ABAC on scholarship to play baseball while there ABAC won the Junior College State title. Then Danny went to Valdosta State and finished up his player eligibility down there. As many may remember adult softball was really big back in them days and Cordele had several very good teams Dairy Queen and Billy’s Grocery come to mind. Danny was asked to play shortstop on the DQ team that was made up of a bunch of Coaches. They traveled all around handing out whooping for several years. In 1973  Danny married his high school sweetheart Cheryl Head of Cordele and they have 3 children Cherie, Courtney and Danny Jr. and 3 grandchildren. In 1977 Danny left Cordele and went to help his father up in Montezuma, Ga. with running a new radio station WMNZ 1050. Danny has continued this family tradition to this day as the owner operator. On Friday nights in Macon County if you can’t make it to the game you can catch Danny doing the play by play at 1050 am on your radio dial. Danny and Cheryl have been faithful members of the Oglethorpe Baptist Church in Macon County for many years. Besides Dannys Christian faith  and church involvement he still enjoys sports a great deal. “Danny was a great friend and very good team mate he was as fluid and accurate  at shortstop or 3rd base as anyone you ever saw, “ said Cliff Hearn. “ My greatest memory of Danny was in Little League when he was 12, in 4 at bats one night while playing for the Pirates he hit 4 homeruns and I ain’t never seen anything like that before.”
In modern times it has become the standard to play or specialize in one sport. Be it known from this day forward that once upon a time there was a man named Danny Blizzard and he could play them all one just as good as the other. It’s called being an athlete. 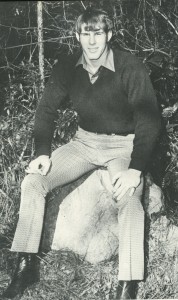