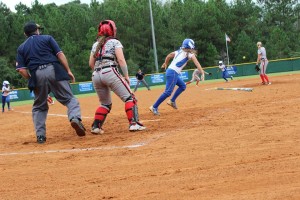 y Angela Bloodsworth
Wilcox County Patriots Varsity beat Charlton County  9-1 on Thursday in six innings.  Wilcox County took the lead in the first inning, plating one run on an RBI double by Montana Ellis, and never looked back.
After posting two runs in the third on a two-run home run by Oakleigh Reeves bringing home Ellis, the Lady Patriots scored two more in the fifth on an RBI single by Ellis and an RBI double by Haley Howell.
The Patriots then scored four runs in the sixth on a two-run double by Martiesha Griffin, an RBI single by Marquetta Griffin, and an RBI single by Montana Ellis.
Ellis racked up three RBIs on three hits for the Patriots on the day.
Laura Lee Keene kept contact to a minimum, striking out eight Charlton County batters allowing only one earned run on two hits and no walks over six innings.
The Patriots improve their overall record to 22-3 and their region record to 13-1.